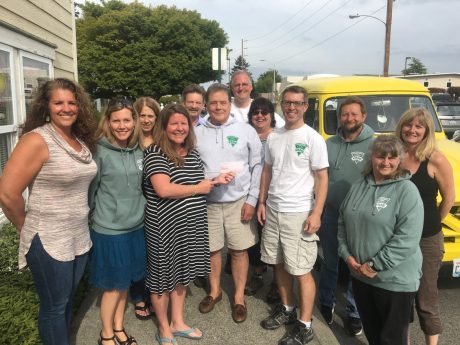 From helping to sponsor the live music at Music on the Lawn to providing scholarships for swimming and sailing classes to making it easy to pick up after dogs at Island Rec parks, the donors to Families and Neighbors Support Island Rec (FANS) are keeping the programs thriving and expanding.

FANS recently provided Island Rec a check for $5,000—money that has been raised so far this year through the nonprofit group’s annual membership and business drives. FANS plans to provide more money to Island Rec throughout the year; in 2015, fundraising efforts provided an additional $20,000 to Island Rec.

“Support from FANS and its generous donors has been integral to helping us both maintain beloved programs and expand the parks and recreation opportunities on our island,” said Island Rec Director Maddie Ovenell.

FANS donations also support the free Movies in the Park events (there are two remaining this summer at Sunken Park on August 13 and 27); Teen Adventure Camps; and San Juan Island Trails.

The FANS Club campaign continues throughout the year; individual and business donations may be made online at www.islandrecfans.org or via check to P.O. Box 875, Friday Harbor, WA 98250.