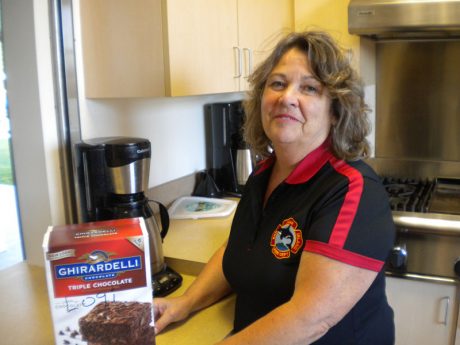 Joan Byrne was a member of the first combined Town and District Structural Firefighter recruit class held in 2001. She was an active firefighter for ten years until she developed arthritis in her hands and felt that she was a safety hazard to her fellow fighters. So, she came out of the “hot zone” and became a member of the Logistics Team for San Juan Island Fire & Rescue.

She came to the Island in 1992 because it was a good place to raise her two children. Joan became a fire fighter because she felt the need for an extended family and a larger group of support members. Also, Joan was deathly afraid of fire and she thought that by joining the fire department she would get over that fear. It worked because she learned all about fire behavior and had the support of her fellow firefighters. “If you know and understand something you are less fearful of it.”

In 2005 she became an Emergency Medical Technician and volunteered with both fire and EMS until her retirement from EMS 2010.

Her awards include Fire Fighter of the Year award for Station 34 in 2002 and for Station 35 in 2004. In 2008 Joan received recognition for Outstanding Contribution to Fire Prevention and the Smokey Bear Program. She has also received the Golden Stethoscope Award for doing rehabilitation for firefighters on the fire line ( taking vital signs, making sure they are hydrated and enforce rest periods before returning to firefighting duties).

Her private life job is being a home health assistant on the Island.

Her job in Logistics is not only preparing meals for firefighters on the fire line but might include directing traffic during fire activity and filling the air bottles that firefighters use. She loves learning new recipes and being able to feed many firefighters in an emergency. This gives her a sense of being a part of a family and connected to those she is helping. For those married to fire fighters, Joan says it is a good way to be involved with what his/her spouse does and meet the people they are involved with. Joan needs and enjoys the challenges of her many roles in the fire department.

San Juan Island Fire & Rescue welcomes all interested men and women ages 16 years and above to drop by the Mullis Street Station and make and appointment to see what we are all about. We offer some fun ancillary positions, such as Logistics, as well. Look online at www.sjifire.org for lots of good information. Or you could view our Face book page: San Juan Island Fire & Rescue. Our phone number is 360-378-5334. We would be pleased to talk with you.