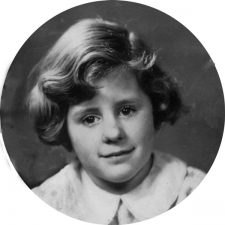 Molly (Miriam Rose) Madden was born March 10, 1929, the fourth child of Raymond Daniel Madden and Gladys Gertrude Guard. Her father Raymond was born on San Juan Island in 1882. Molly’s mother Gladys was one year old when Gladys moved with her parents, aunts, uncles and grandparents from Kansas, via Port Townsend, to San Juan Island in 1888. The Madden homestead was in San Juan Valley, and the Guard farm was in Beaverton Valley.

Molly was raised in the Madden home on Pear Point Road, which her father had built by the Jensen brothers of Jensen shipyard in 1930. She often told stories of chasing after the turkeys on the farm to catch one for Thanksgiving dinner. After selling the Pear Point home and farm, Molly and her mother moved to the beach front home on Turn Point that Gladys had built in 1956, which remains an island refuge for descendants of the Madden family.

After her mother’s death in 1978, Molly devoted herself to running a daycare from her home. Many island children spent their early years under Molly’s protective eye. Molly lived many long and happy years at the house on Madden Point, watching the sea and the seasons, hosting the extended family members who made their pilgrimages to the island every summer. She was known for her cookies — her freezer was stuffed with them. Friends and family were treated to them upon walking through the door; lucky ones were sent home with a Tupperware container, chock full, fresh from the freezer.

Molly resided happily at the Life Care Center of San Juan Island during her final years, where she enjoyed interacting with new friends — other residents and staff alike. Last autumn, Anacortes hospital doctors told her she had only days to live, but Molly was insistent on returning to her beloved island rather than spending her last days away from home. She came home, determined as ever, and defied her doctors by making a speedy recovery and quickly regaining her status as bingo champion.

Molly cared deeply for the children she watched and for the many family members and friends who looked forward to visiting her every summer. She had a feisty temperament and the independent streak for which life-long islanders are known.

A simple graveside service will be held at 2PM at the Cemetery. A memorial gathering of family and friends will be held at Molly’s home starting at 3PM on September 4, 2016.

In lieu of flowers, a donation may be made to San Juan Island EMS in her name.