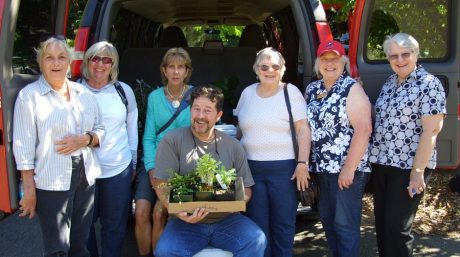 Although an Arboretum Society was started in Seattle in 1930, it really began in 1935, when the Park Board of the City of Seattle and the Regents of the University of Washington drew up an agreement formally giving the University of Washington a lease in Washington Park to establish an arboretum and botanical garden. An organization called the Arboretum Foundation was formed in order to assist in the financial support for the Arboretum. The annual FallAbundance plant sale is hosted by the volunteers in the Pat Calvert Greenhouse and Plant Donations Nursery.   Proceeds of the sale help support the Arboretum. “Fall is the best time for planting your favorite trees, shrubs and perennials in the Pacific Northwest.” Following this advice from the Arboretum Foundation the San Juan Island Garden Club hosted an excursion to their FallAbundance Plant Sale on September 10, 2016.

The group departed Friday Harbor on the 8:05 ferry. Before the ferry departure the driver of the day, Ken Atwell, had picked up our rental van from M & W Rentals. We were pleased to see there was ample room in the van for not only our cooler but lots and lots of newly purchased plants. Being fortified with water and coffee, registrations forms signed and the itinerary reviewed, once the ferry arrived in Anacortes we headed directly for the FallAbundance Plant Sale.

The excursions always seem to have some adventure involved. Though Marguerite Bennett was very familiar with the location of the Arboretum no one was exactly sure where the sale would be. And parking for a 15 passenger van can be an adventure on such occasions. Once there we were greeted with enthusiasm – plant buyers from Friday Harbor!

There were many plants donated by Arboretum members and others started by Arboretum staff. The selection was just amazing! Though some shoppers were wheeling their purchases in wagons we were able to accommodate ours in the boxes provided. See the picture to fully appreciate the fun we had shopping. After our brown bag lunch Barbara Dunn, an Events Committee member, had arranged for a guided tour of the gardens. For 1 ½ hours we toured the gardens in a tram, walked around the newly finished New Zealand exhibit, talked about unusual plants, admired the azalea and rhododendron and talked about when to return to see the best blooms. Our guide, Catherine Nelson, is a graduate of Friday Harbor High School. A lovely coincidence! Then back to the van for the drive to Anacortes where we enjoyed dinner prior to boarding the ferry for home. It was another grand time!

The next off island excursion will be October 17 when we join the Skyline Garden Club for a presentation by John Christenson of Christenson’s Nursery. Watch the garden club web site for further information about excursions, classes and SJI Garden Club meeting information.