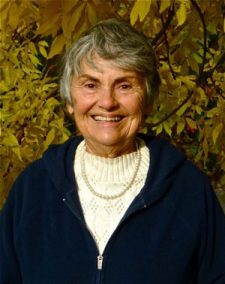 Maria Elisa da Silva Costa was born on May 24, 1937. She died suddenly on July 24, 2016 while visiting her daughter in Brazil. A memorial service will be held at St. David’s Episcopal Church in Friday Harbor on Wednesday, September 14, at 4 pm.

Maria grew up in a distinguished Brazilian family (her grandfather, Heitor da Silva Costa, was the designer, architect and engineer of the monumental statue of Christ the Redeemer, which overlooks the city of Rio de Janeiro, and which was named one of the Seven Wonders of the Modern World).

Her early years were conventional (Catholic school, university, marriage, children) but convention was an ill-fitting garment for this great and free spirit. In middle life she left her past and began a search for truth which she followed throughout her life.

Adopting the name “Jivan,” a Sanskrit term meaning “Life,” she found in India the ancient yet living wisdom she pursued and shared with others. On one such visit to India she met and joined her life to Charles Goodman who was there researching India’s ancient medical system, Ayurveda. Together they travelled to Rishikesh and the source of the river Ganges. There she was initiated in a technique of meditation which she practiced faithfully for the rest of her life.

A truly spiritual person, she radiated life and love to all and had an uplifting influence on virtually everyone she met. She combined a childlike innocence with profound wisdom, and through her work as a psychotherapist, Ayurvedic counselor and meditation coach she helped thousands to a better, healthier life.

Jivan is survived by daughters Lisa and Bel, son Carlos, and husband Charles, grandson Joao and grand-daughter Silvia. Her memory and example will inspire all who knew her to live life more fully and more lovingly.

In lieu of flowers, the family has requested that donors make a contribution to the charity of their choice.