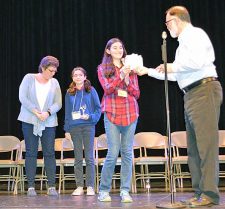 “Alpinist” was the correct spelling for Emma Mughal, an eighth grader from Friday Harbor Middle School, the first-place winner at the 12th Annual Rotary Spelling Bee on March 2. Emma received a trophy and a check for $100. Her 8th grade class, taught by Mr. McMain, was awarded $200, and her school received $300.

In second place was Lucy Marinkovich, a 6th grader from Paideia School. Lucy received a trophy and a check for $75. Her class, taught by Mrs. Mapstead, received $150, and her school was awarded $200.

The other 21 participants received a medal in appreciation of their participation.

The calmer of nerves was Steve Bowman; the pronouncer was Carol Linde; judges were Mary Sliger and Carla Wright. Medals were given by Cyndy Gislason.