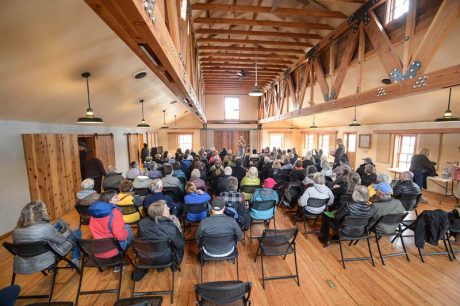 Congressman Rick Larsen’s Town Hall on Sunday at the Brickworks attracted just over a hundred residents from San Juan and other islands.

Larsen started with comments about the failure of the Republicans to end the Affordable Care Act, with the heavily Democratic crowd erupting in applause several times. He cautioned the group that while one battle has been won, “the contest isn’t over yet.”

He credited the grass roots activity across the nation for the outcome. He had asked for people’s personal experiences with Obamacare, and over 300 people in his district “wrote or called or did a video” about how they had been helped by the act, and he shared those reports with some of his colleagues in Congress.

Larsen said the act had reduced the number of uninsured in the state from 14.8% to 5.8% and that uncompensated care at St. Joseph’s Hospital in Bellingham, as just one example, was reduced from about $29 million annually to $20 million.

He then responded to questions for about an hour and a half before heading down to the ferry. Mostly, it seemed, he gave the answers people wanted to hear, but in at least two instances he did not. When he was asked about single-payer health insurance, as called for this week by Sen. Bernie Sanders, he said no, he thought it was more appropriate to stick with defending Obamacare, not to change in the middle of the controversy. And when he was asked about the noise from Whidbey Naval Air Station growlers, he said he had called for a building that would help reduce the volume as they warm up. When a questioner said that wouldn’t help with the noise while they’re in the air, he said no, but it would help his constituents who live on Whidbey Island.

Larsen said his office will push back on Republican cuts to the Environmental Protection Agency and the various agencies that help with affordable housing, and he will do all he can in Congress to overturn the Citizens United decision of the Supreme Court allowing corporations to spend unlimited money in elections. He said the Federal Elections Commission “does a poor job” of enforcing the spending limits that do exist and that he’s not sure how Congress can force it to do better.