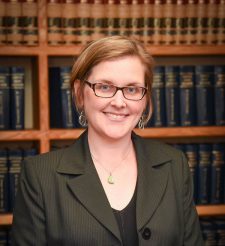 Katie has practiced law in San Juan County since moving to Friday Harbor in February 2008. Prior to that, she served as a judicial clerk to Washington Supreme Court Justice Mary E. Fairhurst and then practiced law at the Perkins Coie firm in Seattle. Katie has served as San Juan County Superior Court Commissioner on many occasions when Judge Eaton was unavailable.

Katie has been actively involved in the community since moving here, including through leadership roles in Soroptimist International of Friday Harbor, the San Juan Islands Agricultural Guild, and in Leadership San Juan Islands, and she currently serves on the boards of trustees of the San Juan Island Library District and the San Juan County Law Library. She also has enjoyed engaging with island youth through the Family Resource Center’s mentoring program and as a coach for students in Friday Harbor High School’s mock trial program. Katie enjoys bicycling with her husband, Kyle, on San Juan Island and throughout the Northwest. Katie is excited by the possibility of serving this community as the next San Juan County Superior Court Judge.

More information about Katie Loring can be found on her firm’s website: http://www.sjilaw.com/ or by calling Katie at 360-378-2191.