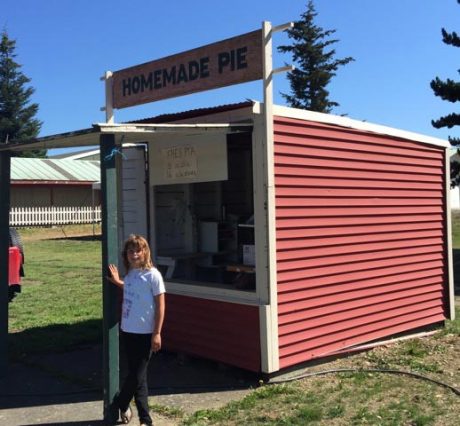 That’s the old booth above. Come see the new Mobile Pie Booth at the 4h of July Parade.

The Friday Harbor Elementary School’s beloved Pie Booth has been rebuilt! The idea for the original Pie Booth was created by FHES parents in the early 1990’s and has become the longest running fundraiser at the school.

Home baked fruit pies are donated and sold by the slice at our SJ County Fair. The Parent Teacher Organization asked for help to rebuild the Pie Booth and is immensely grateful to the Honeywell Charitable Fund for their donation of $5,000 and our local Community Foundation of San Juan Island and the Women’s Fund for their donation of $3,500. These generous islanders have helped secure an Island tradition for many more decades.