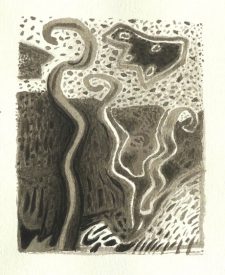 A rare opportunity to take a workshop with the talented and incomparable Joe Miller is being offered by the San Juan Islands Museum of Art (SJIMA).

Four Forests: Walking and Drawing will be offered in four sessions on Tuesdays: September 12 – October 3, from 1p.m. – 4p.m. The students may use any medium or mediums on paper. Possibilities include color and graphite pencils, oil or chalk pastels or brush with pen with ink.

With a sketchpad in hand, Miller will visit each student as they work to offer help and suggestions. Of working in nature, Miller says, “We are together on the Earth: Mountains are rising, streams are falling; all about us is constant growth and decay. We get lost in our drawing; we find ourselves by discovering a hidden trail, then lost again. Then found.”

Joe Miller is an established painter who has the ability to combine expressive color with elegant, minimal, confident lines to create dynamic compositions that evoke an aspect of the natural world.

His work has been shown in galleries in the Mid-West, Southwest and Northwest with two significant traveling group shows, Rediscovering the Landscape of the Americas: Paintings from Mexico, Canada, and U.S.A., and The Artist as Native: Reinventing Regionalism.

Over the last year and a half, Joe Miller has had two solo exhibitions in New York City and participated in a group show in Southampton, NY. His most recent New York City solo show, entitled Joe Miller: Paintings, Watercolors, Drawings, took place from October- December 2013 at Artsource International, a contemporary art/loft gallery space in New York’s Flatiron district and included 14 works.

Over the course of his almost five decades as an artist, Joe Miller has received honors and awards for his work. His work earned him an NEA Artist in Residence grant for three of the United States’ most spectacular national parks: Arches, Bryce Canyon, and Zion.

In addition to catalogue publications and awards, two previous films were made about the artist: The Joe Miller Painting a Painting for a Film Film, produced by Roger Darbonne, Oxnard, CA, and A Sense of Place: The Artist and the American Land, a two-hour documentary, produced by Nebraska Educational Television.