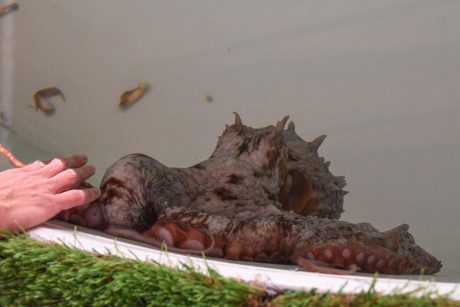 Researcher Dominic Sivitilli from the University of Washington, has been studying a rare Giant Pacific Octopus that he found in the waters just off San Juan County Park on July 2nd. Her name is Gaia, and Dominic transported her to Friday Harbor Labs to study for the last month and a half. 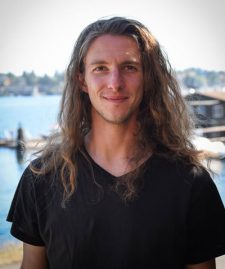 With degrees in Psychology and Biology, Dominic is working toward his PhD. He is studying the way the octopus uses its intelligence.

Two thirds of an octopus’ nervous system resides in its 8 arms, and the arms move autonomously. That is, the brain does not “micro-manage” every movement the arms make, but rather says to the arm “there is an object – pick it up”, or “let’s move in that direction” and then the arms figure out how to make it happen.

This is very unlike a human or other vertebrate, where the brain specifically controls every aspect of movement. “Pick up that object” for a human is more like “lift arm up, extend arm, open fingers, surround object, close fingers around object, retract arm…” and so on, only much, much more specific to every subtle movement being made, all the while receiving, analyzing and adjusting to sensation and feedback. An octopus’ brain leaves all that stuff up to the arms.

Some fun facts: An octopus can see 360 degrees around itself and is color blind. But it can change its appearance (like a chameleon) to an unlimited number of patterns of colors.

Dominic used cameras to track the movements Gaia made, day and night to learn more about the computational strategy she uses for these and other movements.

Because of their separate evolution toward intelligence, octopuses make a great study model for neuro-science, prosthetics, high-tech engineering and artificial intelligence, just to name a few areas where this could lead. But currently there is not a whole lot of interest in this area of study due to the difficulty and constraints involved in working with a creature with no bones or cartilage – they make it very difficult to gather neuro data for example. Add to that, the fact that they live underwater and suddenly, you don’t have an ideal lab animal. Dominic hopes to spark the interest of more researchers with his findings.

Gaia was returned to her watery San Juan home on August 16 and Dominic returned to Seattle last week, but he hopes to be back next year, to find Gaia again and continue his research.