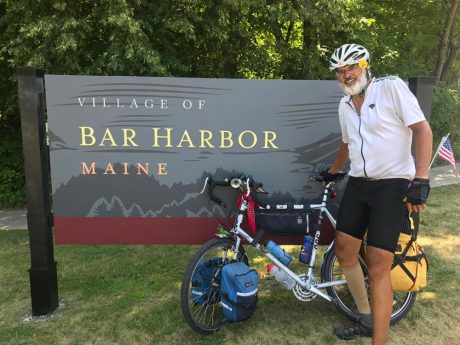 John Stimpson is almost giddy after successfully crossing the country on his bicycle. He left Friday Harbor on May 15 and today he arrived at Bar Harbor, Maine, and said by email: “I’ve had an EPIC ride!”

Bar Harbor, he reports, looks “like Friday Harbor on steroids.” 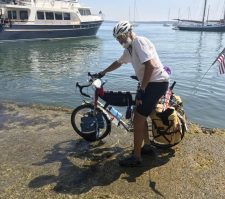 Day 78, John dips his front tire in the Atlantic Ocean

John rode for 71 days, and took 7 rest days for a total of 78 days. All told, he rode 4,273 miles. He had a companion, Lee Kanning from Langley, for the first half of the trip, but Lee had an accident riding on gravel in North Dakota and had to drop out. After that John rode mostly alone but with other fellow riders from time to time.

Next he’ll make his way to York Beach to meet with two of his sisters and their families, and toward the end of this month he’ll ship his bike and gear home and catch a plane to Seattle from Logan Airport in Boston. 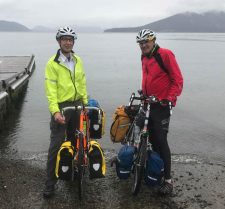 Day One, John and riding partner Lee Kanning from Langley, dip their tires in the Pacific Ocean at Washington Park, Anacortes

A lot of John’s friends have been following his blog the entire way, and those who’ve missed it can go back and read it all now. It’s loaded with pictures of the people he met and places he saw, especially one of his favorites — water towers.

He had probably 250 followers who checked his blog every day, and a total of about 24,000 hits.

You might ask him sometime about the hills in New Hampshire, Vermont, and Maine. Apparently, the farther east you go the steeper the hills.