Southern Resident Killer Whales are Back

Good news from Ken Balcomb at the Center for Whale Research… 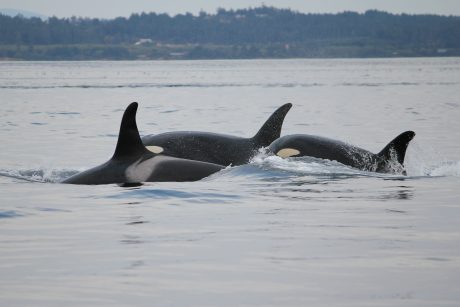 They’re back! For the first time in more than two months, a large assemblage of Southern Resident killer whale pods has returned to the interior waters of the Salish Sea. This population has dramatically decreased in number in recent years, and this summer was unprecedented by their almost complete absence in the core area of their summer habitat around the San Juan Islands and southern Vancouver Island where they occurred almost daily in previous years.

Their frequent occurrence in this habitat for the past half century earned them the name “resident”, given to them by Dr. Mike Bigg early in his pioneering study of ‘killer whales’ in the 1970s. These are extremely vivacious and charismatic animals, as indigenous to the Pacific Northwest as its original human inhabitants.

For several weeks, there have been reports of killer whales coming in off Jordan River in the Strait of Juan de Fuca. But, each time it has turned out that the whales found were Bigg’s Transient killer whales. On September 4, Mark Malleson (CWR staff) confirmed that incoming whales he encountered west of Sheringham lighthouse were RESIDENT killer whales! 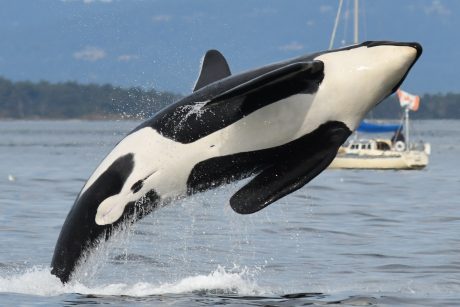 There was some foraging activity going on with all groups conducting occasional sprints into churning tidal waters (the tidal currents in the eastern Strait of Juan de Fuca had gone from big ebb to big flood with a very brief slack at 1205). The salmon tend to move into the Salish Sea with the flood tides, and hang back in nearshore eddies and bays in ebb tides, so the whale foraging and travelling east suggested that there were at last sufficient numbers of salmon to bring them all of the way in. It was interesting to see that J and K pod whales came easterly through Race Passage, while L pod whales came easterly to the south of Race Rocks as far as mid-strait.

By the time the Southern Residents were in front of the Center for Whale Research on San Juan Island, our photographers had taken over 3,500 photographs and documented all of J pod present (24 whales), all of K pod present (18 whales), and 22 L pod whales (13 whales from L pod were not seen or photographed today, but that is not alarming because they are from matrilines that were not represented in this assemblage).

All of the whales seen on September 4 appeared to be frisky and in good condition, though we clearly have a few runts in the youngest cohort of whales – probably having been in perinatal nutritional distress due to recent poor salmon years in the Salish Sea.

About the Center for Whale Research (CWR)
Since 1976, the Center for Whale Research (CWR) has been the leading organization studying the Southern Resident killer whales on the water in their critical habitat in the Salish Sea. CWR performs health assessments to ensure the viability of the whale population, informing elected officials of their ecosystem needs, and sharing the whales’ story with the world. Our 42 years of research has created the only long-term data set about the behavior, health and social dynamics of the Southern Resident killer whales.

For more information on the Southern Resident killer whales, please refer to our website www.whaleresearch.com