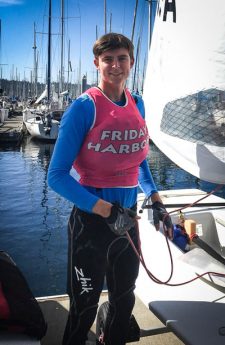 Perham “Per” Black, a senior at Spring Street International School in Friday Harbor is one of 18 youth sailors headed to Florida to compete in the Cressy Cup Laser Radial Division.

Per Black earned his place to compete in the nationals in a regional competition held at Seattle’s Shilshole Marina September 23rd and 24th racing against the best high school sailors from around the Northwest.

At the Shilshole Marina races Per joined his fellow competitors who were greeted by a light southerly on Saturday morning. This proved to be quite stable and peaked around 8 knots by noon. The breeze then began to fade, and by 3pm it had shut off completely. The wind never really materialized Sunday, and only one race was completed in very light winds. Per and Owen Timms, of Olympia, consistently finished ahead of the pack, and ended first and second, with Owen recording 12 points, and Per 14.

Their nearest competitors, from Bainbridge Island, had 34 points. Both Per and Owen will represent the northwest in St. Petersburg, Florida over the 27th, 28th and 29th of October in the Cressy Cup.

Per sails on the youth sailing team operated by the San Juan Island Sailing Foundation which sponsors and supports youth sailing. The team typically has 15 to 20 sailors each year with high school students from Friday Harbor High School, Spring Street International School, and Griffin Bay School.

Photos, video and info at https://www.facebook.com/sjisf/