Per Takes 13th Place in the Nation 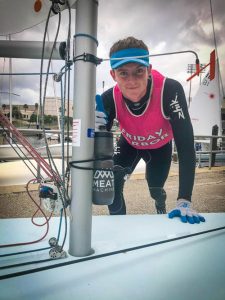 Per sailed against the nation’s top high school sailors who earned berths in the national races through regional
competitions held around the country. At the Cressy Cup Per was in 5th place after the first day of sailing.

On the first day the fleet started racing in light 8 – 9 knot breezes from the east. Per took 10th in the first race, won the second, and was high up in the fleet during the third when it was cancelled due to insufficient winds. On the strength of the first day, which was also his 18th birthday, Per was in 5th place overall.

On the second day competitors were challenged by big breezes and much cooler temperatures. Winds were at 20-25 knots with the occasional gusts in the 30’s. The gusts visibly darkening small patches of the course and capsized boats seemingly at random. The conditions took a physical and mental toll on the sailors as they battled unpredictable winds for 11 races over a 7 hour period. Once safely back on shore, Per good-naturedly quipped “that with just one or two less capsizes I would have finished in the top ten,” and he was buoyed because he showed he could compete with the best in the country. He ended the regatta in 13th place. Race results at this link.

Per sails on the youth sailing team operated by the San Juan Island Sailing Foundation which sponsors and supports youth sailing. The team typically has 15 to 20 sailors each year with high school students from Friday Harbor High School, Spring Street International School, and Griffin Bay School. The team will be starting its 2018 season in February.

Photos, video and info at https://www.facebook.com/sjisf/