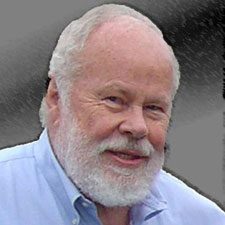 Dr. David Gimlett, a dedicated family physician for over 40 years, passed away on Sunday, November 26, 2017 in Tacoma, WA. Born in Salt Lake City, David wanted to be a physician from age five on. He worked in  hospitals during his later teens, then went on to medical education via a unique pathway: one year at Harvard, pre-med with major in English at Stanford, graduating in 1955; one year at University of Washington in organic chemistry, philosophy, and literary criticism; the following year at the University of Heidelberg in Germany in medicine; then graduating from the University of Washington with his M.D. degree in 1961. His residency training in general practice was in Tacoma hospitals.

David was a renaissance man, with broad interests ranging from science to philosophy. His major interest was in people and how to make their lives better. He was committed to working toward social justice and reform of health care through universal coverage in a single-payer Medicare for All program. We were fortunate to have him practice here on San Juan Island from 1990 to 2000, where he served as Medical Director of the Inter- Island Medical Center. We practiced together during that period, so I came to know him well as a dedicated and able physician, effective administrator, and leader toward the common good. After “retiring” for the first time, he and his wife Sherrie, moved to Edmonds, where he worked in urgent care for seven years in the Everett General Hospital system. After “retiring” again, they moved to Steilacoom, where he again worked in urgent care before finally retiring at age 80.

Over his 40 years in family medicine, Dr. Gimlett delivered some 2,000 babies while practicing broad breadth family practice based on his earlier training and ongoing continuing medical education. Patients lucky enough to have him as their physician were grateful by the hundreds for his skill and compassion in their care. He will be missed by all whose lives he touched. His legacy lives on as one who lived his entire life serving others and as a passionate activist for social justice.

Shared with the Update by Dr. John Geyman, M.D.