“The word ‘gusto’ could have been invented for her” 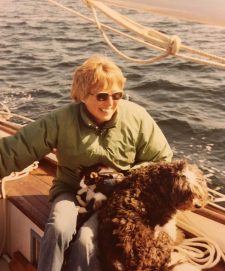 Jo Bailey, who worked on the Friday Harbor Journal as a reporter and columnist for 12 years beginning in 1977, died October 13 in Port Townsend.

She came here on her 30′ wooden sloop, Sea Witch, and despite having almost no newspaper experience persuaded Larry Duthie, then the new owner of the Journal, to hire her.

She was hired first to write a regular column about the waterfront, and produced columns that were on-time and accurate, so he soon offered her a reporting job. As he tells it now, “She knew nothing about news writing, but what she did have from the beginning was a keen nose for news and boundless enthusiasm. She could ferret out stories like an old pro.”

For example, she discovered that the school board was meeting secretly on the ferry, trying to figure out how to deal with a superintendent who was over-spending his budget. She got the story, and the secret meetings came to an end.

Bill Ristow, whom Larry had hired as his new editor in 1981, calls her a “good solid community journalist, curious about what was going on and eager to tell stories about it to her readers, and she knew how to tell those stories both honestly and with respect for their subject.”

He adds, “But I must say what I remember the most about Jo, both as a colleague and years after that as a friend, was her nature. The word ‘gusto’ could have been invented for her. Everything she did, everyone she talked to or about, she did it with enthusiasm and an infectious spirit that was impossible to resist.”

Jo lived aboard the Sea Witch at first, and later joined Al Cummings, a former longtime Seattle radio personality, on his wooden powerboat, the Roanoake. The two of them partnered to produce a series of “Gunkholing” books, with wonderfully detailed information about boating in the Northwest, and unhurriedly exploring quiet bays and backwaters.

In later years her partner in life and in researching and writing the “Gunkholing” books was Carl Nyberg, a naval architect from Seattle. They were married in 2008, and he died in 2010.

Jo was an excellent sailor, and her columns captured an important piece of living on an island. In one she wrote about the boater’s annual ritual, the haul-out, which she did in Port Townsend since her sons lived there:

“So we packed the Sea Witch with every conceivable can of paint, sandpaper, sanders, rags, thinner, brushes, tools, credit cards and checkbooks, and headed to Port Townsend. We caught the ebb, were sucked out Cattle Pass, buffeted through the slop caused by the ebb and the southwest wind, and then had a glorious fast sail across the strait.”

Three years ago, at the age of 86, she joined a swim exercise class and took up lap swimming.

Jo was born in Seattle in 1928, and named Joanne Claribel Imeson, according to her obituary in the Port Townsend Leader written by her son Bill. He wrote, “She spent summers in Indianola where her parents had a summer home and where she retained a home until her death. She graduated from Roosevelt High School in 1946 and married John Bailey in 1948. After their children were born she pursued a teaching degree at PLU and worked as a schoolteacher in Olympia beginning in 1965 before moving to Friday Harbor.”

“She moved to Port Townsend in 2009 where she became active in AAUW and volunteered in the elementary school reading program. She participated in several community activities including family orchestra. She continued to maintain a presence in Indianola while living in Port Townsend and introduced her new friends to the place she always considered her ‘real home.’ “

“Joanne always enjoyed travel and made several Pacific crossings on private sailboats, in addition to visiting, among other places, China (where she taught English for a short time), Poland, Samoa, Tonga, Turkey, Norway, and Scotland.”

A memorial service is planned in Port Townsend, on Dec. 9, 1-4 pm, at the Northwest Maritime Center.