Angela Anderson to “Come Home” from Hawaii to the Salish Sea 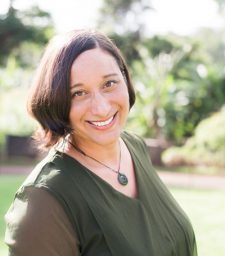 December 12, 2017 – The board of trustees of the San Juan Preservation Trust, a nonprofit land conservation organization based in Friday Harbor, announced today that it has hired Angela Anderson as its new executive director, effective February 12, 2018. Ms. Anderson will lead the land trust’s activities in conserving the beauty, character, and diversity of significant lands in the San Juan Island archipelago.

Ms. Anderson comes to the Preservation Trust with more than 20 years of work and study in the conservation field, most recently as the Kauai Island Director of the Hawaiian Islands Land Trust (HILT). An attorney, she also maintained her own private law practice, specializing in real estate transactions, estate planning, mediation, and environmental law.

Prior to serving as the Kauai Island Director of HILT, she was an active member of the HILT Kauai Island Council, assisting with fundraising, conservation strategy, and transaction review. She has also served on the Kauai County Planning Commission and as a member of the Marine and Coastal Zone Council for the Hawaii state planning office.

Ms. Anderson grew up in Tacoma, Washington. Her early experiences hiking Pacific Northwest rainforest trails, exploring rocky coastlines, and swimming in cold mountain and coastal waters helped form her lifelong dedication to protecting the natural environment. She received her bachelor’s degree from Columbia University, where she designed a dual concentration in Environmental Science and Economics. After graduation, she interned at the Environmental Protection Agency’s Region 10 Office in Seattle.

Ultimately, her interests in conservation led her to pursue a law degree in Hawaii. In 2004/05, she received her law degree from the University of Hawaii’s William S. Richardson School of Law, with graduate certificates in environmental law and conflict resolution.

In her downtime, she especially enjoys hiking, practicing yoga, and kayaking with her husband and two daughters.

“I’m thrilled to be joining the San Juan Preservation Trust and look forward to getting to know the islands’ communities and the unique and beautiful landscapes of the San Juans,” Anderson said. “It’s an exciting time to be joining this organization. I plan to devote my skills and experience to build on its many accomplishments under Tim Seifert’s leadership. For me, this is both a homecoming and the job of a lifetime.”