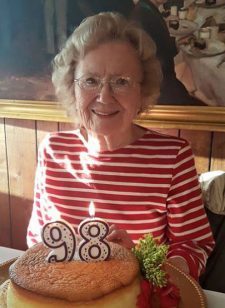 Nora Shaller of Friday Harbor passed away peacefully in her home on December 16, 2017, surrounded by family.

Born on May 16, 1919 in North Battleford, Saskatchewan, Canada, Nora later moved with her family to Edmonton, Alberta where she graduated and pursued a career in the Department of Agriculture at the University of Alberta.

After they married, Nora and her husband Robert lived in many places as his work required frequent moves within the United States, Canada, Australia, the Caribbean, and Switzerland. In the mid-seventies, Nora and Robert settled in Friday Harbor where she was an active member of St. David’s Episcopal Church, St. David’s Altar Guild, the Episcopal Church Women organization, and Friday Harbor Senior Center.

She will be truly missed by her family and many friends, and fondly remembered for her kind, loving nature, strong faith and wonderful sense of humor.

A celebration of Nora’s life will be held at St. David’s Episcopal Church, in Friday Harbor, on Saturday January 13 at 1:00 PM.