SJCT Has a new Executive/Artistic Director 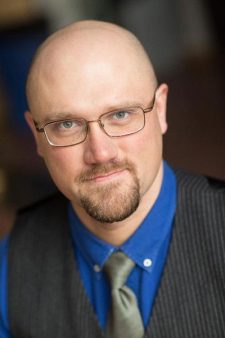 A professional director, playwright, actor, and teacher from Seattle is the new Executive/Artistic Director at SJCT.

After a nationwide search, the SJCT Board of Trustees recently appointed Nathan Kessler-Jeffrey to take the helm at the 29-year-old performing arts organization. Previously, Nathan oversaw the largest educational touring program in the northwest at Seattle’s Taproot Theatre. Originally from Kansas City, MO, he had moved to Seattle in 2009 from New Jersey where he had received an MFA in Directing from Mason Gross School of the Arts at Rutgers University.

“We are thrilled to have Nathan join our SJCT family,” said Board President Sandy Johnson. “In his own words Nathan has stated ‘I am fiercely committed to arts access for all’– a philosophy we wholeheartedly support.”

Nathan adds that he has been drawn to community theater ever since his first production at age 14. “It has become clear to me that SJCT is more than a building — it is a thriving group of people who are passionate about the positive impact arts can have in a community,” said Nathan. “I look forward to being part of that at San Juan Community Theatre, and to getting to know the wonderful people of San Juan Island.”

Nathan and his wife, Courtney (a professional dresser) will be moving to the island later this month; his first day at SJCT is January 22.