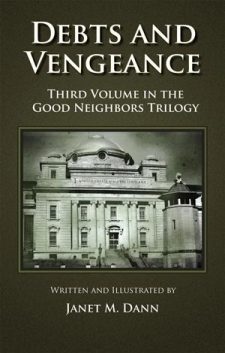 San Juan Island author, Janet Dann is proud to announce the launching of The Good Neighbors Trilogy, books written by both her father, John R. Dann, and herself, at Griffin Bay Bookstore on Saturday, February 10, 7:00 pm. Islanders who remember attending folk dancing evenings with the Danns some years ago, or who were aficionados of his novels, will surely be delighted to attend Janet Dann’s book launch for the just-published third novel in the trilogy, Debts and Vengeance.

John Dann retired to Friday Harbor in 1980 and almost immediately began on two hobbies, teaching international folk dance with his wife, Barbara, and writing. His first novel, The Good Neighbors, was based on memories of growing up on a farm in Depression-era South Dakota. He based his characters on a Romanian family because of a haunting memory he cherished from his youth: that of a Romanian family, singing and taking their children to school in a horse-drawn wagon.

After writing several novels about prehistoric man, John Dann returned to writing about Romania and South Dakota. He began the novel, Irina, about the last member of the Dacia family, introduced in the Good Neighbors. Due to failing health, John was unable to finish the story about a dancer who must flee her homeland because of persecution by the burgeoning hate group, The Iron Guard, and asked Janet to do so. As Janet acknowledges: “It was a long haul,” several years of learning and developing new technical skills. She illustrated her father’s work and had such fun with the process that she began a third book, Debts and Vengeance, to make a trilogy: one book by her father, one by both, and one by herself. The third book ties up loose ends from Irina which have re-emerged and are causing trouble for the Dacias and their neighbors.

This was a long process for Janet, many meetings with a Romanian friend, more research, and bouts of rewriting. She made sure that her descriptions of Romanian daily life and food were accurate, that the music and instruments, the spiritual beliefs and religious customs, the attitudes about fate and self-determination accurately reflected Romanian culture.

She then illustrated The Good Neighbors and Debts and Vengeance to “match” Irina, creating a father-daughter trilogy.

The third in the Good Neighbors Trilogy, Debts and Vengeance deals with issues of debts owed by the Dacia family and of mob vengeance. It is the early summer of 1933 and the Dacia family on their farm in South Dakota agrees to care for the two Epstein children of New York City for the summer while their parents and grandmother make a perilous trip to Germany. The children of the two families are just getting to know each other when Michael-Joseph Dacia and Daniel Epstein, both eight years old, are kidnapped by the mob in an act of vengeance. The Italian and Greek mobsters from Irina are in Leavenworth Federal Penitentiary, and seek vengeance on those who are responsible for their incarceration, including the Dacia family. They plot against the family and others with a series of bare-fisted, illegal boxing matches in dank warehouses by railroad tracks or out behind stock pens at a fair. Horse races, new love, a huge Italian wedding and more mob vengeance all help bring issues to a head as Josif Dacia and his family become a part of the American attitude which is the same in South Dakota as it is in New York City: neighbors helping neighbors, even if they live half way across the country! 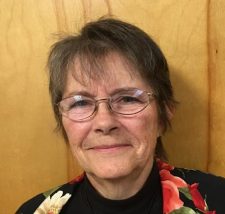 Janet Dann is of the fourth generation of Danns who have their roots in South Dakota. She spent many summer family vacations on the farm there, and a year as a VISTA Volunteer on the Standing Rock Sioux Reservation in the Dakotas. After her time with VISTA, she studied nursing in Alaska, moved to Seattle and worked primarily at Norwest Day Center for Adults as nurse and clinical manager.

In 1994 she married her husband, Tsolo and moved to Orcas Island. After seven years as a visiting nurse on Orcas, she and her husband pulled up stakes and spent the next nine years as full time RVers. Upon her father’s death, she and her husband moved in with her mother, who passed away in 2014. She and Tsolo are currently very happily living in Friday Harbor.