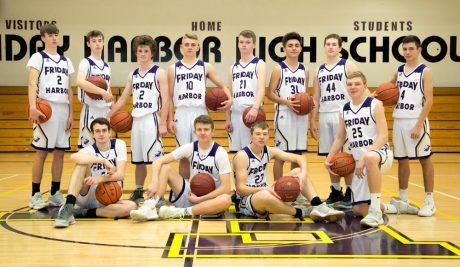 The red-hot Friday Harbor High School Wolverines boys basketball put their 10-game winning streak on the line in the first round of the WIAA 2B first round matchup against the Timberwolves of Morton/Whitepass. FHHS head coach Rod Turnbull, has his Wolverine boys in Spokane for the second time in the past three seasons.

Coach Turnbull has his team peaking at the right time of the season but this first round matchup is loser-out and the Timberwolves are a 2015 State Champion and 2B Central District powerhouse.

“The Timberwolves’ third place finish in the 2B Central District is deceptive” says Friday Harbor Tiny Radio play-by-play announcer, Oly Archibald. “Three of MWP’s losses were to #2 Adna, by a total of 9 points,” he said. “Two of those three losses were by 1 and 2-points.”

Additionally, MWP has faced many of their toughest battles in their own backyard with a loss to conference foes #2 Kittitas/Thorpe (22-1) and splitting the season series against #8 Toledo.

To get to Spokane, the Wolverines’ center Marshall Clark has put the team on his shoulders, but Friday Harbor Tiny Radio, color-commentator Kaila Olin says that no team gets to state as a one-man show. “It’s not all Marshall Clark all the time,” she said. “One game it’s Chase Wilson, one game it’s Isaac Mayer, another game it’s Kyle Mapstead, or Rio Black, or Lucas Chevalier.”

Archibald agrees, “The development of point guard, Lucas Chevalier, has been a fun one to watch.” In FHHS’s region final against Oroville, the Wolverines found themselves in a 7-0 deficit. “Chevalier woke up the Wolverines offense with a bucket, a steal, and a 3-point bucket”. The Wolverines would go on a 16-2 run to close out the first quarter and bounce the Hornets out of the postseason.

Rod Turnbull has mastered the art of exploiting a mismatch offensively and deploying a stifling, blue-collar defense. “During their 10-game winning streak the Wolverines have held their opponents to 50 points or under,” Olin says.

Archibald says that the Timberwolves will attack for four quarters. “The Wolverines will face a battle-tested Morton Whitepass team that averages nearly 62 points on the season. Friday Harbor will have to play their most complete game on both ends of the court for all four quarters.”

But don’t expect the Wolverines to blink, Archibald says. “The Wolverines have seen their share of battles as well. They spent much of the first month of the season getting their mettle tested to the likes of 1A powerhouses #3 Lynden Christian and Kings of Seattle, and a tournament in Alaska. Coach Turnbull is not afraid to play anybody, anytime, anywhere” .

The game will be broadcast on 1650 AM in Friday Harbor and streamed at fhTinyRadio.com. The pregame show will begin at 6:15 PM with special guests from the 2016 FHHS boys team as well as in-depth analysis with Oly and Kaila.