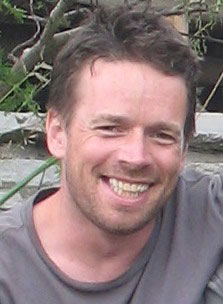 Eric loved computers, and was passionate about ending poverty and social injustice. He merged those passions to do good in the world. He also loved tennis, Formula 1, Monty Python, his bike, music, his nieces and nephews who called him “Dunkoo,” and his big, noisy extended family.

Eric died Thursday at Providence Hospice, Everett. He spent his childhood on San Juan Island; he bought his first computer with money from the sale of his 4-H pig at the county fair. He was never bored, always taking things apart and rebuilding them, or getting into trouble with his brother and sister and the many island kids who hung out at the family’s farm. He went to high school on Bainbridge Island.

Founder of the Maendeleo Foundation in Uganda, Eric was named American Innovator by the Aspen Institute in 2009, for creating the Mobile Solar Computer Classroom. He and his Ugandan partner retrofitted two Toyota Rav 4’s with solar panels, bringing computers to young people in rural villages to enhance their chances of employment. Eric wrote training software customized to the Ugandan culture and tribal languages. The foundation continues its work today and Eric’s MSCC idea has been replicated across Africa.

In addition to his work in Uganda, Eric lived for eight years in Greece, where he and his friend Fotis operated a computer business. He taught himself Greek and basically became as Greek as he could. He requested that his ashes be spread there.

Eric felt things too deeply for this world in many ways and suffered for its failings. But he wasn’t all serious: he had an acerbic, irreverent wit that attracted everyone to him and made for hilarious family dinners. He created the pumple pie with his Aunt Jan, Virtual Lunch with Bill (the first Facebook, if only …), and had many a sarcastic word for John McEnroe.

A celebration of Eric’s life will be held March 24th from 1-4 p.m. at the family home on Queen Anne Hill, Seattle.