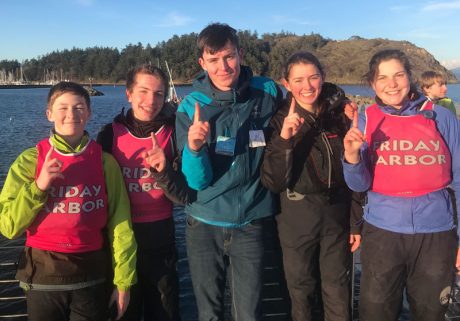 After 11 races under a clear sky, the scene on the dock was jovial for most in attendance at the NWISA North Regionals “Frostbite” Regatta at Anacortes, but tense for those rooting for the Friday Harbor sailors. With one more good race, they could win their first regatta in at least 5 years.

In High School dinghy racing, the regatta winner is determined by the combined score of two boats, that sail in different fleets, typically an “A” fleet and a “B” fleet. The lowest score of the combined “A” and “B” fleets wins. The first-place boat in any given race gets one point, the second two, third three and so on until the final boat crosses the line.

The Frostbite had 23 boats competing from approximately 13 schools, from Bellingham to Seattle. Throughout the day the wind had blown steadily from the North, with an intensity of between 5-15 knots, allowing for many races to be completed quickly.

Consistency between races and between fleets is key, and Friday Harbor, coached by Bob Halliday, managed to never finish worse than 10th in any given race, and won five of 12 races between the two fleets. In “A” fleet, Skipper Per Black, a senior at Spring Street International School, and crew Emmet Carrier, a Sophomore at Friday Harbor High School, started the regatta on a high note by winning their first four races through their unparalleled teamwork and above-average boat speed. Leah Black, Skipper, and Addi Kessler, Crew, both juniors at Spring Street, also started extremely well, collecting a first, second, and third in their first three races. The chemistry between these long-term friends really showed as they moved their boat through the fleet.

The Orcas Vikings, a perennial sailing powerhouse, however, remained close with some good finishes of their own. Going into the 12th and final race the wind was backing off towards the West, becoming more unstable. Finishing in the top two was mathematically assured, but it in order to come away with Gold, Leah and Addi had to finish within the top fifteen boats. If they didn’t, rival Orcas could come away on top. After a jumbled start, and a series of large wind-shifts, it all came down to the final leg of the race. With 23 boats in the fleet, including some of the best sailors in the Northwest, anything could happen.

However, as the race drew to a close it was clear that victory was easily assured as Leah and Addi cruised across the line in 7th place capping a remarkable day. High fives were given all around, and celebratory Girl Scout Cookies were eaten.

Friday Harbor’s JV, captained by super-crew Evan Foley, a sophomore at Friday Harbor High School, also managed a respectable result (18/23), especially given the fact that a tactical decision was made to sit out a number of the races on account of fatigue and wind. The Varsity Crews (Kessler and Carrier) showcased their versatility by skippering the JV boats– something that is rather unheard of on other teams.

All in all, it was an exciting Saturday for the Friday Harbor team, with many great races (perfectly managed by the Anacortes hosts). Though the team reached great success this weekend, Bob Halliday, the coach, was quoted as saying that “he is very excited to get back out on the water” at practice to continue improving.

If you are an 8th-12th grader interested in joining the Sailing Team, email the team manager at gibblack@gmail.com to learn more. Summer sailing classes are given in conjunction between Island Rec and the San Juan Island Sailing Foundation on Percich Pond and at Jackson’s Beach for all ages.