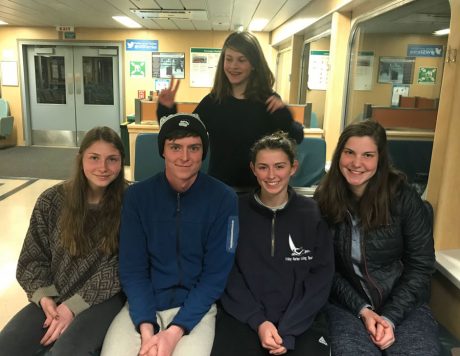 While the weekend of March 17 and 18 beckoned many to their gardens, it was a hard-fought weekend of sailing for the Islands’ high school sailing teams. Held at Dockton Regional Park, on Maury Island in lovely Quartermaster Harbor, teams from Bellingham to Hood River, Oregon came out looking to secure a spot in the District Championships, which will be held in late April. The winners of Districts are eligible for the national championships. There were seven spots on the line for the Districts, and both Friday Harbor and Orcas were looking to punch their ticket.

In High School dinghy racing, the regatta winner is determined by the combined score of two boats, that sail in different fleets, typically an “A” fleet and a “B” fleet. The lowest score of the combined “A” and “B” fleets wins. The first-place boat in any given race gets one point, the second two, third three and so on until the final boat crosses the line. The Quartermaster Ranking Regatta had 19 boats competing from 19 schools in the Varsity (or Gold) division, and 18 teams from 15 schools in the Junior Varsity (Silver) division.

Racing was held on both Saturday and Sunday, and the Gold fleets finished 11 races under light, shifty winds. While the prevailing breeze was southerly, it could shift 10 or more degrees without warning, rewarding the sailors who could quickly read and then tack on these “shifts,” and sometimes allowing a boat to make up spots on competitors who were on the other side of the course, and not getting the benefit of the wind’s changed position.

Orcas Island’s team, coached by Hannah Tyson-Turner, secured first place following the third race, and never gave up the top spot the rest of the regatta. Skipper Maggie Toombs and crew Emma Freedman sailed Gold A division, and Dominick Wareham, skipper, and Millie Kau, crew, sailed Gold B. Maggie and Emma ended the regatta with 54 points, and fourth lowest in the regatta and second lowest in Gold A, and Dominick and Millie had 50 points, the third lowest in the regatta and second lowest in Gold B. Orcas’ team total of 104 points was 16 ahead of second place Olympia, and 40 points ahead of Friday Harbor in third.

Friday Harbor, coached by Bob Halliday, also showed very well, easily securing a spot in Districts. Per Black, skipper, and Zoe Calverley, crew, sailed in the Gold A division, and ended up with 25 points, netting the lowest (best) individual boat score in the regatta. Per and Zoe never finished lower than 4th place, showing remarkable consistency. Leah Black, skipper, and Addi Kessler, crew, both newer to the sport, held their own in the competitive Gold B division, amassing 119 points, for a team total of 144. Leah and Addi kept smiling throughout the weekend and showed grit as they never stopped fighting for spots throughout the races. Gold B scores ranged from Olympia’s 29 to Kingston’s 209.

The depth of the Orcas team was evident as their JV boats finished first as well. Ronan Rankin, skippering for the JV (or silver) A division was consistently near the top of the table. Complete scores can be found at scores.hssailing.org.

Mark your calendars, as the top area teams will be competing at this year’s Island Cup, held at Roche Harbor April 14th and 15th. If you are an 8th-12th grader interested in joining the Sailing Team, email the team manager at gibblack@gmail.com to learn more. Summer sailing classes are given in conjunction between Island Rec and the San Juan Island Sailing Foundation on Persich Pond and at Jackson’s Beach for all ages.