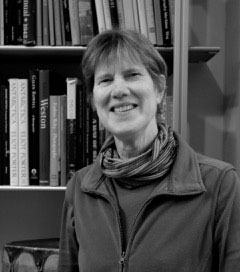 Meg Partridge, cinematographer, director and producer is presenting her Academy Award nominated film Portrait of Imogen on April 7. She will share personal memories of life with her iconic grandmother, photographer Imogen Cunningham.

The film was made with Cunningham’s photos and audiotapes of conversations between her grandmother and her father, Rondal Partridge, a photographer, too. As they discussed process and technique and Meg loved eavesdropping in her father’s workshop.

Meg had known her grandmother when she was in her 70s, 80s, and 90s. To her, Imogen was always this old woman who took photographs, but Meg dove into her early history and her family history while researching for the film, making Imogen’s unusual life come alive for her.

Cunningham decided to become a photographer at an early age and photography became not just her livelihood, but her life. As a University of Washington undergraduate Cunningham purchased a 4 x 5-inch camera and developed photographs in the family’s converted woodshed.

At the time, there was no photography instruction at the UW or most universities, so Cunningham majored in chemistry then traveled to Dresden to study photography.

Returning to Seattle, she worked at the studio of the famed photographer of the American West, Edward Curtis, before opening her own portrait studio.

She became one of the first female professional photographers and a major contributor to the development of photography as an art form.

Cunningham is known for her beloved images such as the (Frida) Kahlo portrait and the magnolia blossom, but enjoyed experimenting with techniques like double exposures and portraits of friends and family. She could be adventurous at the turn of the century as her environment was not touched by as many conventions as an urban setting. Later, Cunningham broke most of her early portrait negatives and saved only those she had done primarily to please herself.

The Through My Lens: Imogen Cunningham is showing until May 7 at SJIMA as part of the 2018 The Female Gaze, where dedicated, innovative and insightful artists bring a feminine perspective to their creations and our experience.