A First for Melodious Notes … 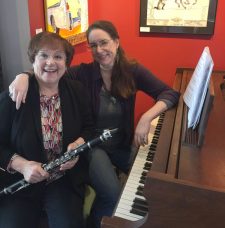 San Juan Island’s annual showcase of island and Northwest chamber musicians adds a “custom-made” composition to its repertoire in 2018.

Melodious Notes Over the Harbor will be presented at San Juan Community Theatre on Saturday, April 14 at 7:30 p.m. Highlighting the concert is the premiere of San Juan Island composer Alex Shapiro’s “Water Voyages,” for clarinet, bassoon, and pre-recorded audio.

While concert director and clarinetist Sue Collado has included several of Shapiro’s compositions in past concerts, this is the first time one was adapted specifically for the Melodious series and the first time an electroacoustic piece will be presented. This music began its life as a piece for solo clarinet more than a decade ago, and was then adapted for a clarinet duet. “When Sue told me she was looking for another of my works to perform with bassoonist Pat Nelson, I thought perhaps they’d enjoy a custom version of “Water Voyage,” said Shapiro. “We’re all very happy with how it turned out!”

In addition, for the first time, the concert will include multimedia—Shapiro is also an amateur photographer and says her images “of the inspiring waters surrounding our islands make the perfect accompaniment to the performance.”

The Business Partner for Melodious Notes Over the Harbor is Heritage Bank. Tickets are $20 for adults, $10 for student reserved and $5 student RUSH at the door. The SJCT box office is open Tuesdays through Fridays from 1 p.m. to 4 p.m. and Saturdays from 11 a.m. to 2 p.m. Tickets are also available on-line at www.sjctheatre.org