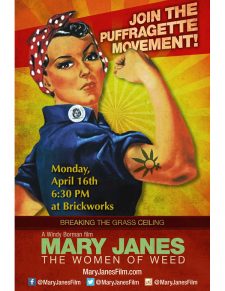 Join filmmaker Windy Borman as she explores the movement to end marijuana prohibition, her own relationship to the plant, and the stereotypes surrounding it. Through a series of empowering and educational interviews with a broad diversity of women leading the industry today, Windy’s own assumptions are transformed as she discovers cannabis liberation intersects with the most urgent social justice issues of our time. She learns how this green revolution has big effects on environmental sustainability, ending the War on Drugs and the Prison-Industrial Complex, and the destructive domination of Big Pharma.

Not only does ‘Mary Janes: The Women of Weed’ promise to be one of the best documentaries addressing social injustice, gender inequality, and marijuana you’ll ever see, it promises something much more important: hope for real, tangible, attainable change.” – Massroots