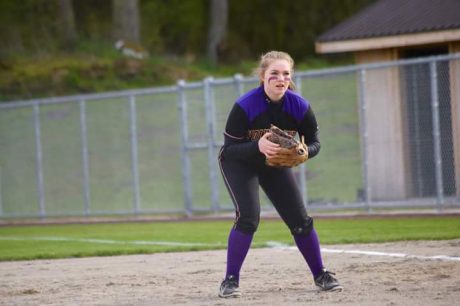 Oly Archibald shares the lowdown on the Lady Wolverines…

With Concrete and Darrington deciding to not take to the diamond against the big bullies from Friday Harbor in the NW 2B District Tournament, the Lady Wolverines will make their 4th straight trip to the WIAA State Tournament in Yakima.

The Wolverines will play the winner of Saturday’s 12 pm game between Orcas Island and La Conner for the District Championship at 2 pm in Sedro-Woolley.

The Wolverines won the NW 2B League championship going a perfect 12-0 and a 14-7 overall record. The Wolverines are averaging 10 runs per game and giving up just 4. Former Wolverine All League first baseman Hannah Hopkins will join Oly Archibald for the broadcasts on Friday Harbor Tiny Radio 1650 am.

Hannah has a theory how her Wolverines have become a state power: “Coach Lambright and coach Holt brought so much intensity to the team my Freshman year that at first the players were skeptical. But once the players actually realized they knew what they were doing it all really clicked. The aspects of the coaching they brought to the table made the team rise to a new level of skill, mental preparedness and teamwork. Adding in coach Pauls and coach  Pongs things really started to esculate in the best possible way.”

“The coaches are not the only factor in the success of the team. Without all of the amazing, hardworking, strong, skilled girls that have been on the team the last 4 years none of this would have been possible. The time and passion each player put on the field every day during practices and games has been incredible. Being a part  of this team in years past has really taught me how to work hard and to achieve a goal as a part of a team. So really it is a combination of the coaching staff’s ability to motivate and teach and the players’ want and love of the game.”

After losing 6 seniors off of last years squad the Wolverines needed some of their players to step up and improve. Assistant coach Robert Pauls says for his money Jr catcher Ava Hoffman is the  most improved player from last year. “Ava batted 260 last year – this year she is batting 450 and leads the team in home runs with 3 and leads the team with 25 RBIs”.

Hopkins says she is not surprised at all with Ava’s improvement. “I have always been impressed how hard Ava works and how she has on countless occasions, stepped up to the plate and played amazingly. I am not surprised at all that people would call her the most improved on the season. Even though Ava was an impressive player last year, she always seems to be pushing herself more and more everyday she is on the field. This  is a trait that seems to run in the family, because her sister Savannah is always pushing herself and others on the team to be better too”.

On the mound the Wolverines have had great improvement from Jr hurler Grace Pauls and Sophomore Siri Lindstrum. Both Robert Pauls and Hopkins says Lindstrum has really improved from last year and Hopkins says Siri just needed to find her confidence. Wolverine 3rd baseman Bailee Lambright leads the club in hitting with a 576 batting average and is tied with RBIs at 25. Jr Center fielder Thea Seitz has 2 home runs on the season and leads the Wolverines with 36 runs scored.

The Wolverines will now play for the NW 2B District championship game Saturday at 2 pm in Sedro Woolley. They will play the winner of the Noon semi final between Orcas Island and La Conner. The Wolverines will start State Tournament play next Friday in Yakima with a 10 am or Noon opener. The Tournament schedule will be announced on Sunday. All of the games will be broadcast live on Tiny Radio 1650 am and on the web at fhtinyradio.com. Oly Archibald has the live play by play and Hannah Hopkins has the color commentary and game analysis.