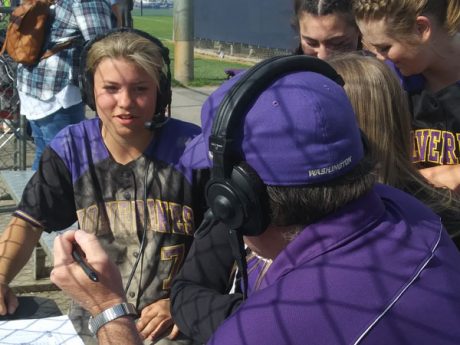 You know you have a good thing going when you have just cashed your ticket to the WIAA State Fast Pitch tournament in Yakima for the 4th time in 4 years – yet there is no outlandish celebration with shooting Sparkling Apple Cider all over each other. Not that the Young Friday Harbor Wolverine Fast pitch team was not happy and proud of their accomplishment. Its now the expectation of the program.

The Wolverines beat Orcas Island 15-5 to win their 4th straight NW 2-B District Tournament. It was the 4th time this year the Wolverines had beat the Vikings and now have won 14 straight games in the rivalry since Brian Lambright took over the program 5 years ago. Lambright now has a 76-42 career record at Friday harbor a record that would make Heather Tarr proud.

Against the Vikings the Wolverines used the perfect combination of wise old veterans and wide eyed freckled faced youngsters. The Hoffman Sisters, Savannah the Senior and Ava the Junior, along with the speedster Junior CF Thea Seitz combined for 7 hits and 6 runs. Freshman Darcy Ayers and Bristol Halvorson combined for 4 hits and 5 runs.

Halvorson, a former Cheerleader, on this day traded in her face sparkles and nail polish for half the dirt from Janicki Park which had collected on her jersey head to toe as she grinned from ear to ear while she was being interviewed on the Tiny Radio 1650 am post game show. Halvorson talked about the love she has for her team and the fact she plays club ball all Summer all over the Northwest and Canada.

Then there is the Wolverines tough as nails 3rd baseman Sophmore Bailee Lambright. Late in the game Lambright went crashing into the fence of the Orcas dug out. Former Wolverine Hannah Hopkins doing the color commentary for Tiny Radio voiced her concern for Lambright’s health after the collision. I quickly assured my broadcast colleague that Bailee was quite all right and that I was more worried for the poor fence. Yes those are the expectations that come with winning when you have become a Northwest power house. Now its onto bigger and better things, its the WIAA State tournament at the Gateway sports complex in Yakima.

The On Broadway Show for the best fast pitch teams in the state. The Wolverines (15-7) open up the Tournament Friday morning against the Ocosta Wildcats (19-6) of the feared District #4; the toughest division next too the old black and blue division of the 1970s NFL Central. The Wolverines will be underdogs already losing to the wildcats 2 weeks ago in Mount Vernon. So what are the expectations for this young wolverine team that has only 2 Seniors on the squad. Just making it to the state tournament is already a major accomplishment. From my non biased media opinion the Wolverines do have a shot at going 2-2 like they did in last year’s tournament. That would be big time considering how young this team is. However I know how Brian Lambright and his coaching staff have made believers out of their team. Their never give up the ship persona and their more grit than glitter team attitude just might find the Wolverines in the semis on Saturday afternoon. If that where to happen the Tree Top plant in Selah would not have near enough sparkling cider for the Wolverine celebration.

Wolverine Bites and Notes: In State tournament play the Wolverines are 1-6 against teams from District 4. The Wolverines did beat Hoquiam when the Wolverines where a class A team. Orcas Island who plays state power Pe Ell / Willapa Valley is 0-7 against District 4 teams in state tournament history. The Friday Harbor – Ocosta game starts at 11 am. The game will broadcast live on Tiny Radio 1650 am and on the web at fhtinyradio.com. The pre game show starts at 10:45 am. Oly Archibald and Hannah Hopkins will have the live play by play. Archibald and Hopkins will broadcast the 9 am game between Orcas Island and Pe Ell / Willapa Valley on KMNT 104.3 fm Centralia and on the web at KMNT.com. Archibald and Hopkins will be covering 7 teams for 4 different radio stations. It looks like the weather will be perfect in Yakima with both days being 80 degrees.