Orpha’s Lilacs Before the Bulldozer 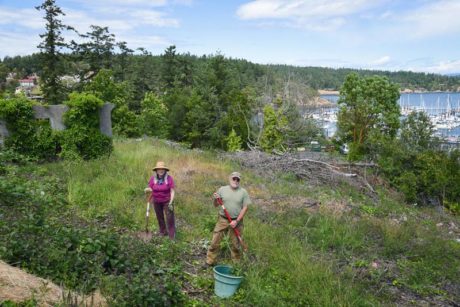 On the bluff overlooking the harbor, Chinmayo (left) with Roger Ellison from the San Juan Island Grange, dig up Lilacs for transplanting – SJ Update photo

Those who have been reading the SJ Update for a while may recall a story from 4 years ago this month, “Before the Bulldozer“, describing how Friday Harbor resident Chinmayo saved a cherry tree that was growing on some land that was about to be bulldozed and developed for new construction.

Well, she is at it again…

This photo from circa 1914, shows 4th of July revelers outside Orpha’s house – SJ Historical Society photo

Have you seen the cleared area across the street from the courthouse (photo above) that overlooks the harbor?  That lot is soon to have construction happening as well. And – that lot also used to be the location of a small house that was built in the 1800’s which for a long time was occupied by Orpha A. Sutton, a cook at the school, who in the early 1900’s planted Lilacs outside the house.

Both Orpha and the house are long gone, but Chinmayo recently noticed after the land was cleared for the new construction, that the lilacs are still there, growing strong. So she got together with Roger Ellison from the SJI Grange and together they dug up and potted many lilac starts. 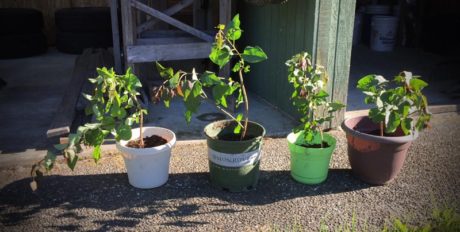 Soon you will be able to have a piece of island history growing in your yard. Starts will not be ready for a couple weeks most likely, but when they are, they will be available at the SJI Grange booth at the Farmer’s Market on Saturdays, with proceeds benefiting the SJI Grange.

To learn more about the lilacs or for more information on her “Before the Bulldozer” idea, you can contact Chinmayo by email at:
chinmayoart [@] gmail [.] com. 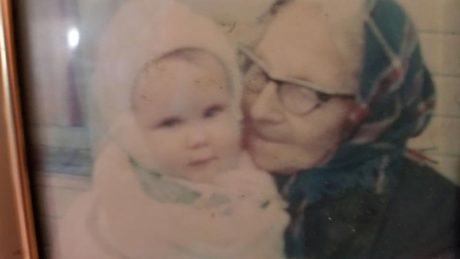 Many thanks to Orpha (right) for planting the Lilacs, and her great-grandaughter Tami Rable (left) who helped with details for this story – Contributed photo