A Cook’s Cabin Full of Clues 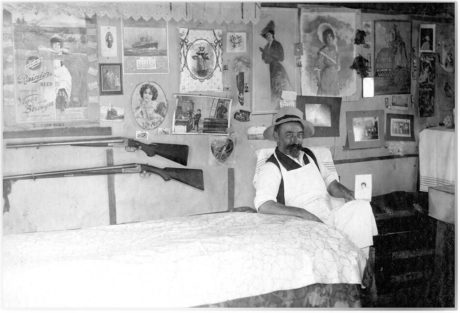 There is so much to see in this historical photograph taken at a Salmon Bank fish camp on the south end of San Juan Island. It is rare to see an island photograph of an interior scene from over 100 years ago, so this one stands out in the archives collection.

When it was donated to the San Juan Historical Society and Museum a number of years ago, it came with the simple description of “Cook’s Cabin at Salmon Bank, late 1800s.” Fish traps, as adapted from Native American reef net design, were first introduced there in 1892. With the fish trap operations came the need for larger crews, rustic housing, and support buildings like a cook’s cabin on shore.

Dating photographs can be challenging. However, by zooming in on a digital copy of this particular image, we can gather some clues about this one.

Four posters on the cabin wall are of interest; two of which are particularly helpful. Old Castle Whiskey was first registered as a brand in 1872. Kis-Me was the first fruit-flavored chewing gum, established in 1886, and advances the earliest date of the photograph to that year. Rainier Beer was established by the Seattle Brewing and Malting Company as its signature brand in 1893 (“Vigor and strength in every drop”). The Morrell’s Eureka Brand label displayed in the poster was first used in 1899 to advertise a line of cured meats. (We won’t comment on the depiction of a half-dressed maiden to sell ham, except to say it helped establish the year.)

Thus it appears, based upon evidence provided by the posters, that a time period of around 1900-1910 but not prior to 1899 could be assigned to the photo. What about other clues? The ladies’ clothing seen in the posters suggests an era of 1890s to about 1910, but we don’t know how long this cook had been decorating with these same posters and calendars (which dates could not be read).

A photograph indicates more than just a time period. In this one, we also see two lovely patterned tablecloths and a border of lace trim high up on the wall, atop the posters. The central figure is a man clearly confident and proud of his decorated surroundings. He is dressed neatly and with style in what looks like a Panama hat, a gentleman’s accessory popular for decades. What about the identity of this dapper man?

He was possibly a fish camp cook by the name of Frank McLain, mentioned as an 1899 cook in a National Park Service document about the history of fishing at Salmon Bank. McLain also appears in the 1900 U.S. Census for San Juan Island. He is described there as a 36 year old, unmarried cook, residing near the Firth Family in what is now American Camp. This census record for his age and residence in 1900 point to Frank McLain as the possible identity of the mystery cook in the photograph.

This census also lists a 19 year old “servant” in the McLain household. He was also a cook. The Salmon Bank camp was known to employ up to 70 workers at a time, housed in dormitories on site while coming together for meals in a communal hall. This big operation would require a cook with an assistant. But is the cook in the photograph indeed Frank McLain? We cannot know with certainty. But we do know that the cook in the picture had a special woman in his life. In the photograph, he holds a portrait of a lady who appears to have been important to him in some way. Many things are tacked up on the cabin wall, but this one photograph of a woman is held dearly by the cook.

Thanks for posing, Frank or whoever you are.