Regrettably, approximately 75% of newborns in the recent two decades following designation of the Southern Resident killer whale (orca) population as “Endangered” have not survived, and 100% of the pregnancies in the past three years have failed to produce viable offspring. 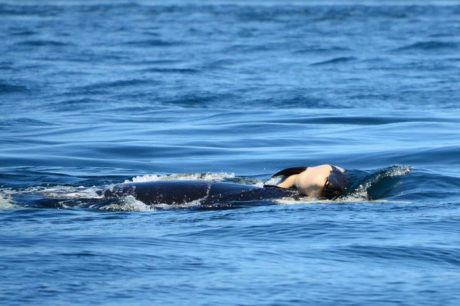 We are saddened to report that a baby Southern Resident killer whale (SRKW) died a short time after it was born near Victoria, British Columbia on July 24, 2018. The newborn whale was reported alive and swimming with its mother, J35, and other members of J pod near Clover Point on the Victoria shoreline in mid-morning. A Center for Whale Research team was on the water in Haro Strait at the time and immediately responded to photo-document the newborn calf for the long-term census study we maintain for the US and Canadian governments. 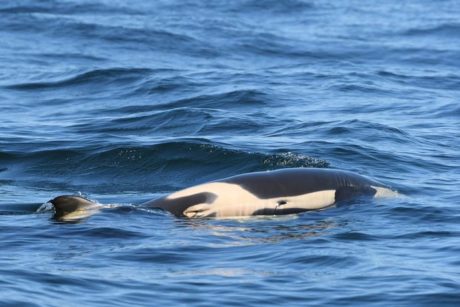 Unfortunately, by the time the CWR crew arrived on scene, the newborn calf was deceased, and the pod had traveled several miles eastward of the reported sighting location. The baby’s carcass was sinking and being repeatedly retrieved by the mother who was supporting it on her forehead and pushing it in choppy seas toward San Juan Island, USA. The mother continued supporting and pushing the dead baby whale throughout the day until at least sunset.

A resident of San Juan Island near Eagle Cove reported:

“At sunset, a group of 5-6 females gathered at the mouth of the cove in a close, tight-knit circle, staying at the surface in a harmonious circular motion for nearly 2 hours. As the light dimmed, I was able to watch them continue what seemed to be a ritual or ceremony. They stayed directly centered in the moonbeam, even as it moved. The lighting was too dim to see if the baby was still being kept afloat. It was both sad and special to witness this behavior. My heart goes out to J35 and her beautiful baby; bless it’s soul.”

As of sunset last night, July 25, J35 was still pushing the dead calf near East Point, Saturna Island, Canada. Killer whales and dolphins have been known to support and transport their dead calves for as long as a week – a testament to the amazingly strong mother/offspring bond and caring. 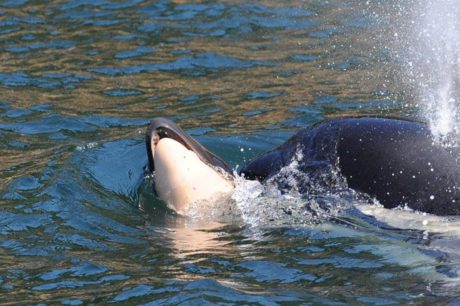 The newborn orca will not be given an alpha-numeric designation as a member of the SRKW population because it did not survive long enough to demonstrate its viability. Regrettably, approximately 75% of newborns in the recent two decades following designation of the Southern Resident killer whale population as “Endangered” have not survived, and 100% of the pregnancies in the past three years have failed to produce viable offspring. The Department of Commerce, NOAA Fisheries, has designated the SRKW population as a “Species in the Spotlight” due to its imminent threat of extinction.

The SRKW population cannot survive if it is unable to reproduce, although with the naturally long life-span of living whales of this species we may be able to see the survivors for a while. The ultimate cause of the SRKW population decline and poor reproduction is food related: the primary prey species for these top marine predators is Chinook salmon, with most spawning populations also listed as “Endangered” and many already extinct. The American Fisheries Society in its landmark publication “Salmon 2100” has pointed out that changes in core policy drivers in our society are required if wild salmon are to survive this century. It follows that these same core policy changes are required to save the whales. Will that be the job of our leaders or the voters or a time-consuming task force to sift through all of the actions/inactions that have not worked? Hatchery salmon are inferior and not sustainable.
Link to webpage

The Center for Whale Research is dedicated to the study and conservation of the Southern Resident killer whale (orca) population in the Pacific Northwest. With only 75 Southern Resident orcas remaining, there is a greater need than ever before to speak out on their behalf.