More on the American Camp Fire 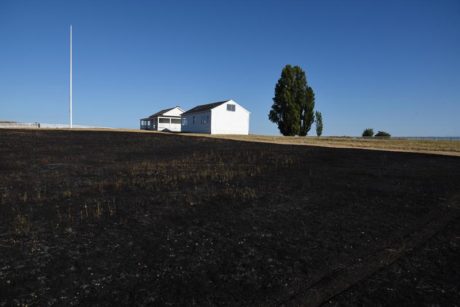 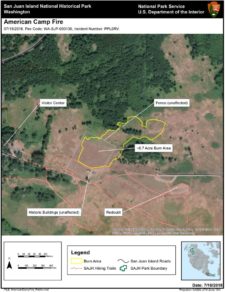 Thanks to 23 Fire District #3 volunteers, Sunday’s 6.7-acre grass fire on the parade ground at American Camp was brought under control less than 75 minutes after it was called in.

Park superintendent Elexis Fredy, who is in Minnesota this week working on a review committee related to workforce development, said by email, “I am extremely impressed and thankful for our amazing volunteer fire department and Brad Creesy.”

And acting superintendent Brandon Cadwell called the response “incredible – fast and effective.” He said, “We couldn’t be more grateful.”

Creesy, the fire chief, said volunteer Kyle Dodd was the incident commander, “and he was doing such a good job that I just stayed out of his way.” Dodd initially ordered a Washington Department of Natural Resources helicopter for support but canceled it once they were able to knock the fire down.

The incident occurred during a historic weapons artillery demonstration, supervised by Cadwell. He said a safety determination is made for each day’s demonstration. “I check the temperature, humidity, wind levels, and state of fuels and make a determination whether it is safe to hold the demonstration – each day an independent review.”

On Sunday the expected high temperature was 82, the humidity was almost 70 percent, there was a light breeze, and the grass in the area was “not tall.”

They fire blank rounds of pure black powder contained inside aluminum foil, and after firing they “secure the piece,” using a wet sponge to extract any material from the barrel. But a small bit of aluminum foil had fallen on the grass.

“I had turned around to speak to the public,” Cadwell said, “and a visitor said, ‘Hey, there’s a fire.’ We tried to stamp it out. We had some water nearby and five fire extinguishers, but the wind picked up just enough that it spread quickly. We called 911 and ordered the evacuation of visitors, and the firefighters were there within 20-25 minutes.”

Three fire trucks responded, as well as an aid unit in case anyone was injured by the fire.

“And the wind changed just at the right time,” Creesy said. Several trees were scorched, but the fence around the parade ground didn’t burn at all, and the major burn was confined to the grassy area.

Fredy has suspended future live firing demonstrations until a review is completed on the operations, and until mitigation measures are in place to avoid future ignitions.