Know Your Islander: Author Dean Adams on Fishing in Alaska 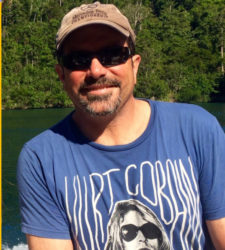 Griffin Bay Bookstore and the San Juan Island Library are hosting Dean Adams at the San Juan Island Library on Monday, October 1, 7:00 pm. This is your chance to hear first-hand about his memoir, Four Thousand Hooks: A True Story of Fishing and Coming of Age on the High Seas of Alaska, a fabulous story about ocean adventures, commercial fishing, maritime life, and the Northwest coast 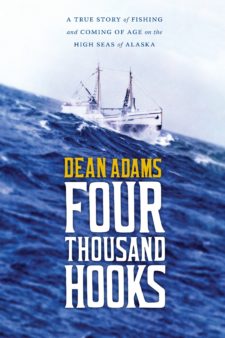 As Four Thousand Hooks opens, an Alaskan fishing schooner is sinking. It is the summer of 1972, and the sixteen-year-old narrator is at the helm. Backtracking from the gripping prologue, Dean Adams describes how he came to be a crew member on the Grantand weaves a tale of adventure that reads like a novel―with drama, conflict, and resonant portrayals of halibut fishing, his ragtag shipmates, maritime Alaska, and the ambiguities of family life.

At sea, the Grant‘s crew teach Dean the daily tasks of baiting thousands of longline hooks and handling the catch, and on shore they lead him through the seedy bars and guilty pleasures of Kodiak. Exhausted by twenty-hour workdays and awed by the ocean’s raw power, he observes examples of human courage and vulnerability and emerges with a deeper knowledge of himself and the world.

Four Thousand Hooks is both an absorbing adventure story and a rich ethnography of a way of life and work that has sustained Northwest families for generations. This coming of age story will appeal to readers including young adults and anyone interested in ocean adventures, commercial fishing, maritime life, and the Northwest coast.

About the author
Dean Adams was born in Seattle and grew up on the shores of Lake Meridian near Kent, Washington. In 1972, he began his commercial fishing career at the age of 15, working on his uncle’s schooner, the Grant, and went on to become the owner and captain of the Quest in 1979 at 22. In the 1990’s, Dean returned to the University of Washington to finish a B.S. in Fisheries Science (1994) and completed his M.S. in 1998. He retired from Alaska commercial fishing in 2007.