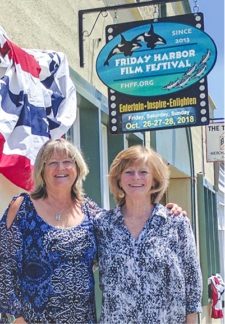 The Friday Harbor Film Festival was co-founded in 2013 by Lynn Danaher and Karen Palmer.  They realized early in the process they had very compatible skill sets, so Lynn took the role of Director having organized multiple events from rock ‘n’ roll concerts to symposiums, and Karen with 30 years at Sundance, took on the role of Producer.  Their shared belief in the importance of documentary storytelling has served the FHFF well, by becoming one of favorites of documentary filmmakers, themselves.

Featuring the filmmakers for Q & A at every screening creates a high level of personal engagement with the audience.  The FHFF gives voice to dedicated filmmakers who make enormous sacrifices to share an important story.  Each film is required to have a call to action and/or a message of hope.

By expanding the FHFF to honor the important contributions of individuals, with the Andrew V. McLaglen Lifetime Achievement Award and the Local Hero Award, they have brought an extra level of credibility to the event.  This year they are expanding honors with the Laszlo Pal (former Board Member) Emerging Filmmaker Award, to acknowledge a promising young filmmaker.

Lynn and Karen have worked tirelessly as 100% volunteers since the beginning, even personally funding shortfalls.  The FHFF has grown into a year-round event, screening films from January through June and hosting special screenings year around. They hope to expand support and funding to hire additional staff as the demands have moved beyond just volunteers.

Lynn and Karen both feel very proud of this exceptional event and how it has enhanced Friday Harbor as a shoulder season destination.