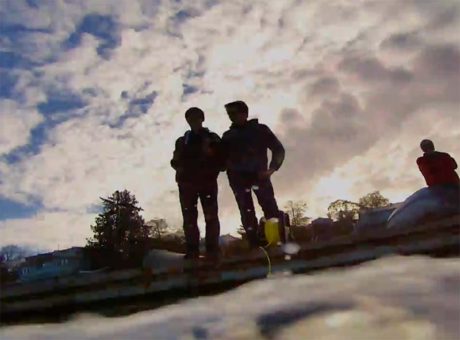 For my community projects class at Friday Harbor High School, I worked alongside Evan Foley to do research on pollution prevention in the Port of Friday Harbor.

The ROV they used – Contributed photo

We started our project by meeting with our mentor, Dr. Derek Smith, PhD of Marine Ecology. He was very helpful throughout the project as he was a great resource for opening up our project to new possibilities. One major thing that he helped us with was finding an ROV so that we could see the pollution in the port. This is where a major factor in our project came along, Steven Roberts of Nomadic Research Labs.

Derek and Steven had talked before we met about the ROV that Steven had, the OpenROV Trident. This was a new ROV that had very great controls and an amazing 1080 pixel quality. It was very generous of Steven to share his new technology. We immediately jumped on the opportunity to work with him, and chose three different weekends to work with him at the port.

(See a video clip below.)

An old sunken tire at the Port – Contributed photo

Using this time we gathered footage of some trash around the port at different locations, although we didn’t find much. What we did find were tires, miscellaneous household items, bottles, and even a toilet.

From here we began to do research on the impacts of different sources of pollution in the marine environment. We found that the biggest impacts were from batteries and oil cans. Batteries can leak lots of acids and lead which are very bad for our environment, as for oil cans, there is oil which leaks out and pollutes as well.

These among other pollution items, are what my partner and I worked on as we made message boards and flyers to put up at the Port of Friday Harbor for the sake of spreading awareness to locals and tourists to know the real threats to our marine environment.