Of Pandemics, Sacrifice, and Peace 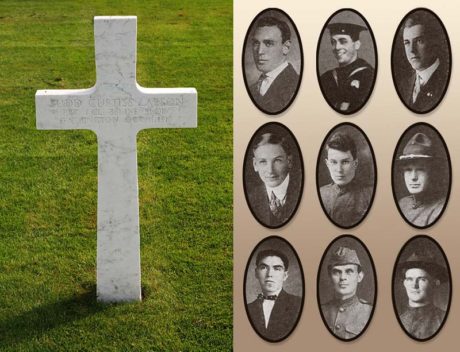 Although it’s now been 100 years since the end of World War I, many of us grew up with first hand stories of fear, bravery and all too often, sadness about family experiences with the double punch of world war and a pandemic known as the Spanish Flu. San Juan Island was no exception.

First, there are some facts to know about the Spanish Flu of 1918. It did not originate in Spain. It’s just that Spain, as a neutral country, had no reason to suppress news of its spread while other countries did, so as to avoid showing any weakness to their war opponents. This created an impression that the flu was more prevalent in Spain and had originated there.

The pandemic hit Washington state hard in the fall of 1918. With so many servicemen from around the country housed in military camps, this strain of influenza spread quickly and could develop into bacterial pneumonia, the more serious threat to life. The Army’s Camp Lewis in Pierce County reported an average of ten influenza/pneumonia deaths a week during its spread in September. In just one year, this pandemic would kill at least 50 million people around the world.

In 1918, San Juan County had a population of just around 3,600 people. This small county was home to 124 men who left families behind to serve our country in World War I, the “Great War” as it was called then. Of these 124 men, nine of them never returned home. Combat in France claimed six of their lives, while pneumonia was listed as the ultimate cause of death for three others. You can see their names on the stone monument in Friday Harbor’s Memorial Park, a project of the Women’s Study Club, dedicated on November 11, 1921. Here are small glimpses into the lives of the nine men, pictured above, who perished:

George D. Allain, 21, Roche Harbor, U.S. Navy. Died October 2, 1918 of pneumonia at University of Washington Hospital in Seattle. Son of Toussaint and Mary Lacroix Allain, George left behind wife Josephine, a granddaughter of San Juan Island pioneer Charles McKay (who raised the first American flag on the island after the British troops left in 1872). A son named Laurence was born to Josephine two months after her husband’s death and one day after her grandfather McKay’s death. Laurence himself would later die at age 20, in a wood truck accident on San Juan Island.

Harold Butterworth, 19, Roche Harbor, U.S. Navy. Died November 30, 1917 of pneumonia at the Naval Hospital in Brooklyn, New York. Son of Levi and Mary Brierley Butterworth, Harold was the first from San Juan County to die in service to the country during World War I.

Fred E. Hackett, 19, Friday Harbor, U.S. Army. Killed in combat May 1, 1918 near Montdidier, France. Son of Collins and Elizabeth Guard Hackett, he was the first from San Juan County to give his life on the battlefields of France. American Legion Hackett-Larson Post 163 on San Juan Island bears his name.

John M. Jones, 23, Decatur Island, U.S. Army. Wounded at Meuse-Argonne, France on September 29, 1918 and returned to the U.S.; died from effects of his wounds on June 5, 1919 at Camp Lewis, Washington. Son of John and Isabelle Reed Jones.

Two Orcas Island brothers were both killed in combat in the Argonne Forest of France:

Ultimately defeated, Germany signed an armistice agreement with the four Allied powers (Great Britain, France, Italy, and the United States) on November 11, 1918. Marking a cease fire and truce, it went into effect in the 11th hour of the 11th day of the 11th month. It led to the Treaty of Versailles, the 1919 peace treaty that officially ended World War I.

Originating as Armistice Day, we now recognize November 11 each year as Veteran’s Day, a day set aside to thank and honor all who have served in the U.S. military, during any era of war or peacetime.

To learn more about San Juan County during the Great War, check out “World War I: The San Juan County Experience,” an excellent article by Lynn Weber/Roochvarg for HistoryLink.org, the online encyclopedia of Washington State.