Portrait of an Ocean – An Enlightening Vision 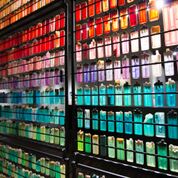 All the Little Things

Surprisingly, marine debris and plastic disposable lighters are at the heart of April Surgent’s art. Her exhibition at the San Juan Islands Museum of Art (SJIMA) attracts visitors with its glowing beauty and reveals a larger message.

She has taken her keen interest in the natural world and the relationship of humans and ecosystems, turning it into art.

In 2013, after another alarming climate change report on the news, Surgent was received into the National Science Foundation’s, Antarctic Artist and Writers Program where she worked at Palmer station.

Then she volunteered for six months as biologist for the National Oceanic and Atmospheric Administration’s, Hawaiian Monk Seal Research Program as an artist in residence. April worked as a member of a three-person team at Pearl & Hermes Atoll in the Northwestern Hawaiian Islands. Accessible only by boat and some 1200 miles northwest of Honolulu, Pearl and Hermes Atoll lies in the protected waters of the Papahānaumokuākea Marine National Monument.  Though the landmass is small, it provides critical habitat for untold numbers of green sea turtles, thousands of nesting seabirds and 164 endangered monk seals.

The team was alarmed at the piles of debris washing ashore in these remote atolls. With civilization thousands of miles away, humans have unwittingly contributed to the debris problem. All the little things is created from the 2,300 cigarette lighters Surgent gathered on the beaches of the atoll.

Bycatch is made from collected 500-watt, red, Takuyu light bulbs commonly used by fishermen which litter the shores.

Wanting to preserve the remaining integrity of our oceans, Surgent cares deeply about creating positive changes. She reminds visitors that “marine ecosystems are vital to all life not only because the world’s oceans are a rich natural resource but because they also produce more than 50% of the oxygen that we breathe and regulate the climate.”

As a call to action, a station in the exhibition invites visitors to record their ideas and commitments to positive change in their choices to use plastics. Visitors can read the entries and be inspired to make their own lifestyle choices.

Most recently, Surgent has worked from the Farallon Islands National Wildlife Refuge, west of San Francisco but she lives and works on the Olympic Peninsula in Washington State.

Surgent started working in glass in 1997 in Seattle and went on to study at the Australian National University. After graduating with honors, she focused on wheel engraved glass. Her work has been exhibited in numerous US galleries and museums as well as in the United Kingdom and Australia. She teaches and lectures internationally. In recognition of her work she has been awarded a 2009 Behnke Foundation Neddy Fellowship and a 2016 USA Ford Fellowship.

Portrait of an Ocean is part of the yearlong theme 2018 THE FEMALE GAZE Part 3 – The Woman as Visionary and Creator.

The exhibition is open until December 10 on Friday-Monday from 11 a.m. to 5 p.m. at 540 Spring Street in Friday Harbor. Admission is $10 for entrance to all the exhibits and free to members and those 18 and under. Mondays are Pay As You Can Days. SJIMA thanks the sponsors who made the exhibition possible Islanders Bank, Town of Friday Harbor, Kenmore Air, Printonyx, Mike’s Café & Wine Bar and Harbor Rentals.

Other activities such as Art For Fun for adults and Fall Family Art Days are in full swing at SJIMA. Visit www.sjima.org for more details.