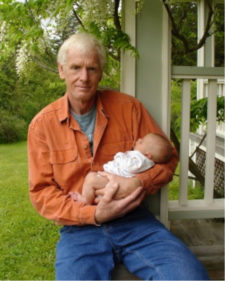 Shel Bedsole, 67, passed away peacefully at home on October 12, after a short illness.  He was surrounded by his loving family, Manya Pickard, his daughter Tracy Bedsole, stepson Ebony Pickard, (Kirsten) and granddaughter Manya Pickard. He is survived by his sister Dee Polley of Boise, Idaho and nephew Shawn Surber of Boise Idaho.

Shel was born in North Carolina.  He considered himself to be “bi-coastal” as he grew up on both coasts as the son of a Navy captain.  As a young man he followed his independent spirit.  He left home in the 1960’s with his long mane of dark, curly red hair and a song in his heart!

The Woodstock Festival helped form his lifelong love of the music of the sixties and seventies. He and his former wife Serelda and stepdaughter Charlotte escaped to a remote farm in West Virginia, where they worked the land with old style farm equipment and a team of Percheron horses.

When they felt it was time to re-enter the world, they moved to a living history farm in Gettysburg, Pennsylvania, with horses in tow.  He lived on the farm where he continued to work his horses in the fields and also worked as a blacksmith.

From his father, he had learned to scuba dive at a young age and later went on to deep sea diving and underwater welding construction.  He then settled in Charlottesville, Virginia to raise his daughter Tracy and had a nice middle class life with a more traditional job for a while.  Then it was time for him to move on…

A desire for change and magical serendipity led him to San Juan Island in 1997.  He met Manya Pickard through good friend Gordy Elliot; they danced all evening at a contra dance, and were together ever after, marrying in 2000.

Shel became a wonderful part of this community, and volunteered at the Community Theater, where he enjoyed working with stage lighting while he enjoyed music and many shows.

Shel worked as the maintenance man in addition to setting up of events at the San Juan County Fairgrounds for 10 years.  He was known for his humor and tireless ability to help everyone who needed it.   He was naturally gifted with photography, and loved documenting everything from garden and home life to the work of his artistic friends.  Shel had time for hiking on Mt Baker, traveling to Costa Rica, Amsterdam, Italy and especially enjoyed the mystical place known as Damanhur.  Shel did get to have a few joyful years retired, focusing on all his favorite things, including his beloved family, land and animals. His kindness and smile will be greatly missed.

Shel was preceded in death by his parents, Don and Winnie Bedsole of Boise Idaho, for whom he provided loving, attentive care to the end of their lives.

“when the fog horn blows, you know I will be coming home”  ~ Van Morrison