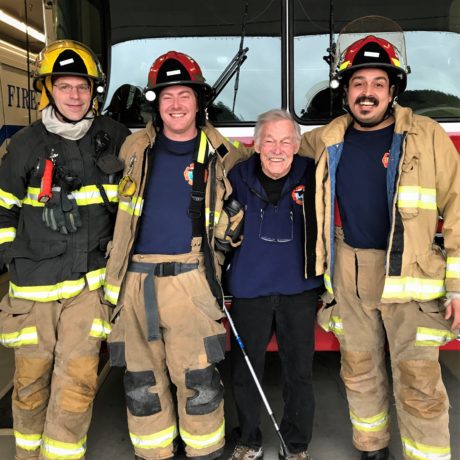 On Saturday, February 23, 2019 at Friday Harbor Marketplace from 11:00 a.m. to 2:00 p.m., San Juan Island Fire and Rescue firefighters will be out in front of the store raising funds for the 2019 Leukemia and Lymphoma Society (LLS) Stairclimb.

Lieutenants Michael Henderson and Gilbert Venegas; Firefighters Mark Wagner and Michelangelo von Dassow will be in full structural turnout gear – boots, pants, coat (liners intact), helmet, and gloves and using their breathing apparatus on a stair climber exercise machine in front of the market to raise money to fight blood cancers and prepare for their participation in the world’s largest on-air stair climb competition.

On Sunday, March 10, 2019, the four firefighters will compete in the 2019 Leukemia and Lymphoma (LLS) Stairclimb. San Juan Island firefighters will join over 2,000 career or volunteer firefighters from throughout Washington in the race to climb the stairs to the top of the Columbia Center, Seattle’s tallest building.

The entirety of the course must be completed while wearing full turnout gear, while on-air. It takes 69 floors, 1,356 steps, and 788 ft. vertical elevation gain to reach the highly acclaimed Sky View Observatory on the 73rd floor. This physically challenging competition is representative of the struggle that blood cancer patients endure.

Please come root for our firefighters on Saturday February 23, 2019 at Friday Harbor Marketplace, 515 Market Street in Friday Harbor, from 11:00 a.m. to 2:00 p.m. and help us raise money to research and fight blood cancers. Donations are also accepted on the team’s LLS Firefighter Stairclimb page.