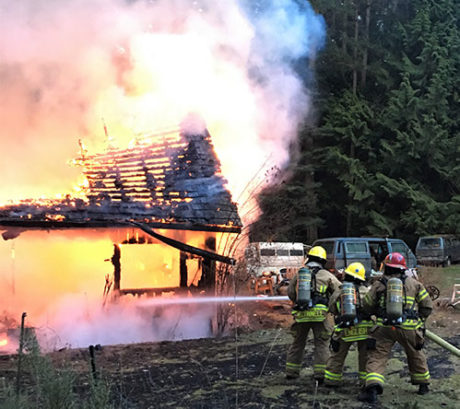 The first fire was reported at a single-story home at 5:40 a.m. near Roche Harbor. The residents and their pets were able to quickly evacuate the home. Firefighter’s rapid response helped limit the spread of the fire, although there was significant damage to one room.

The second fire was reported at 5:25 p.m. in a home off of Roche Harbor Road. The home was unoccupied at the time and unfortunately was destroyed. More than 20 fire personnel responded to the scene in four engines, one rescue truck and two tenders to provide water supply. Additional assistance was provided on the scene by the department’s logistics team, along with San Juan Island EMS and the San Juan County Sheriff’s Department.

San Juan Island Fire Chief Norvin Collins said, “Yesterday was a rare and sad day on San Juan Island as there were two separate house fires within 12 hours of each other. While one home was destroyed and the other suffered damage, all residents were safe and no one was injured in either fire.”

“We are grateful to our partners at San Juan County Sheriff and San Juan EMS for their assistance, and always for the support of our community.”