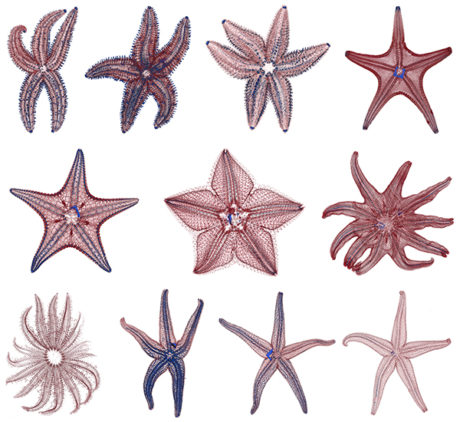 Mo Turner, Ph.D. candidate in Biology at the University of Washington and Cassandra Donatelli Ph.D. candidate at Tufts University are collaborating scanning sea stars. In January they presented their preliminary findings to the Society of Integrative and Comparative Biology. The following by Mo Turner, with Cassandra Donatelli is excerpted from February’s Tide Bite, the newsletter of the University of Washington Friday Harbor Laboratories. 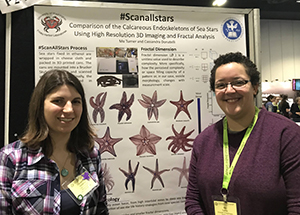 “For Cassandra and I, this collaboration was born almost by accident.  I have been studying the ecology of sea stars for several years in the Pacific Northwest, from observing population dynamics of stars during the onset of Sea Star Wasting Disease (SSWD) to studying the diet and feeding behavior of our iconic purple and orange intertidal ochre star, Pisaster ochraceus.  Cassandra has been doing research at FHL with the Summers Lab for several years, looking at the morphology of anguilliform (eel-like) fishes and how they swim.  This involves spending much of her time in the back rooms of Lab 8 running the micro-CT scanner (Figure 1) to look at 3D renderings of the skeletal structures of her fish. Fortunately, the Karel F Liem Fish Biology Endowment supports running the machine at no costs to the scientists using it, which led to Cassandra offering to scan one of my “bugs” (as she calls just about any critter that’s not a fish).”

To read the entire article link to… Tide Bite