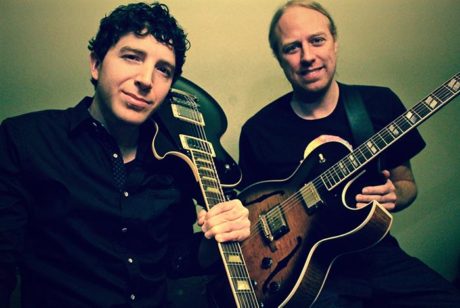 Chance Hayden and Andy Coe, two front running string slingers of the Pacific Northwest, join forces with an electric guitar band showcasing the depths of their talent and mutual admiration.

For over a decade both players have made vast imprints within their respective cities of Portland and Seattle as avid sidemen embracing everything from jazz, blues and funk to reggae, psychedelic rock and jam bands.

Their individual projects as leaders have further displayed a chameleon-like musicality, through their fluid guitar work and eclectic compositions, which they’ll expound together. Completing the unit are bassist Damian Erskine and drummer Tarik Abouzied who have become a well-oiled machine as the rhythm section behind Skerik, Happy Orchestra and Paul Creighton Project.

Hayden’s talent as a composer has charted through his self-released debut, The Family Tree, from which multiple songs appeared within the acclaimed BET television series Being Mary Jane and Sony Pictures’ #1 box office film The Perfect Guy. Furthermore, Hayden’s musicality is known through an ongoing video series, Peace House Sessions, in which he has produced celebrated artists including Snarky Puppy guitarist Mark Lettieri and former backup singer to Prince, Liv Warfield.​As a Portland State University Jazz Studies graduate, Hayden’s guitar stylings are well informed through the jazz tradition while equally matched with influence of funky rhythm players a la Curtis Mayfield and Cornell Dupree to story-telling bluesmen such as B.B. King and Johnny Guitar Watson. Hayden’s sophomore album and label debut, Get Somethin’ (Ropeadope / Atlanta Records), forwards his authentic approach in the jazz-funk idiom.

With a rich background in jazz and a joyful enthusiasm for blues and psychedelic rock, Andy Coe is recognized as a deeply intuitive, emotive guitarist. As an architect of sound and style, Coe draws in listeners, making collective exploration and resolution accessible across genres. Born and raised in Seattle, Andy played in the critically acclaimed Roosevelt Highschool Jazz band before going on to graduate from the music department of the University of North Texas. He has played venues and festivals around the country and world ever since. Andy has performed with many great musicians including Jimmy Page, Duff McKagen, Jerry Cantrell, Kim Thayil, Paul Rogers, Rich Robinson, Reggie Workman, Rashied Ali, Ravi Coltrane, Norah Jones, Stanton Moore, Mike Clark, Bobby Previtte, Skerik, Mike Dillon, Karl Denson and many others. Currently Andy resides in Seattle and plays in Skerik’s Bandalabra, Tuatara, McTuff and the Andy Coe Band among others.

Don’t miss this special collaboration between some of the region’s most highly esteemed musicians.