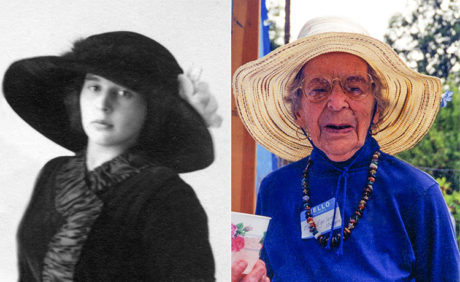 “It’s always a good day!” – Etta Lightheart Egeland, on any given day of her life in response to “Have a good day!”

This is National Women’s History Month, designated by Congress in 1987. Who better to feature this month for women’s roles in island history than Etta Egeland? She was the godmother and engine of San Juan Island historic preservation for nearly all of her 105 years. Etta’s recollection, documentation, and interpretation of island life were singularly and collectively notable and unparalleled. We think someone should design a superhero action figure of her.

Etta Elizabeth Lightheart was born November 10, 1896 in a log cabin at Straitsview, her grandfather Peter Lawson’s farm on the west side of the island. She was the only daughter of Alexander Lightheart and Annie Lawson Lightheart. Her earliest memories were of being at her grandmother Fanny Lawson’s funeral in 1900 at Valley Cemetery and then later as an older child witnessing a dispute between her aunt and Roche Harbor’s iron-handed John S. McMillin over her aunt’s right to cast her ballot for the party she wished in an election.

Glancing through old issues of the Journal newspaper, one can find many interesting mentions of Etta’s activities, such as these:

Etta loved the County Fair, where she was either employed or volunteered for over 70 years. She had also run a farm, worked at the pea and fish canneries, been a night telephone operator, a tax preparer, worked in the school kitchen and on the ferry in the snack bar. She also enjoyed serving as a history guide on island bus tours, a natural role for her.

Etta believed in making things happen. Her dedication to the community was most visible when she spearheaded efforts and inspired others to join in the establishment of local parks, the garden club, and the historical society. When it came to the preservation of island history, what didn’t she do? She envisioned it. She organized it. She preserved it and she shared it. She would say she wasn’t the first and she didn’t do it alone, but at the San Juan Historical Society and Museum Etta was a founder, director, curator, docent, researcher, and trustee. For about 50 years. The Etta E. Egeland Resource Center at the San Juan Historical Museum is named for her.

She was also a beloved mother, grandmother, great-grandmother and great-great-grandmother. She instilled in her family a love of island history and community service. Etta passed away on September 9, 2002, when she was just two months shy of celebrating her 106th birthday. She had lived in three centuries and through 21 U.S. Presidents. Historic preservation may have been her passion, but she was thoroughly modern. She was extraordinary.