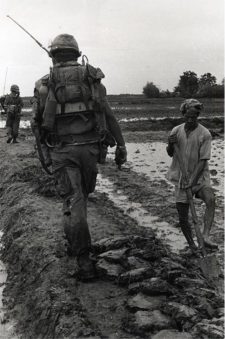 Photo by Donald A. Cordi

He Left Us A Legacy of the Vietnam War

In A War Never Ends opening at the San Juan Islands Museum of Art (SJIMA) you can make a striking discovery in one of the galleries.

A box containing several professional-looking photographs resting in their yellow Kodak box was found at the solid waste transfer station by an employee, also a Vietnam veteran. He contacted Military Museum director Peter DeLorenzi at the Friday Harbor American Legion Post 163 and turned over the photographs.

Being curious about the photos, the person who took them, and how they came to be on San Juan Island, DeLorenzi started looking for a veteran named Cordi. For a while, he discovered nothing and the puzzle remained.

Then further research revealed that Sp5 Donald Cordi was a photographer in Vietnam from 1967-1969. Shortly after returning from Vietnam, Cordi committed suicide on August 1, 1969. He was buried at Willamette National Cemetery in Portland, Oregon.

He had taken the time to print these photos, so it was determined that he wanted to exhibit them. This is his show 50 years later-the Cordi Collection.

Presented by the San Juan County Vietnam Veterans and American Legion Posts, A War Never Ends opens Friday, April 5 and runs until June 3. Local veterans of the Vietnam war have contributed their own personal experiences to the exhibit.

The accompanying exhibition, MY WAR: Wartime Photographs by Vietnam Veterans brings together 72 photos, poems and journal entries of 25 veterans from around the US. Most of the material was previously kept hidden away, even from family and friends. Many veterans destroyed their photographs taken during the war in order to purge painful memories and close a visceral door to the past.

This is the second showing nationally and first on the West Coast. It opened at the Highground Veterans Memorial Park, Neillsville, Wisconsin in August 2016.

This exhibition is sponsored by the Dave and Nancy Honeywell Charitable Fund and Gary and Susan Sterner, as well as Printonyx, Harbor Rental and Browne’s Home Center.

Veterans are admitted free for the duration of the shows. For more information, visit www.sjima.org. Hours are Friday-Monday 11-5, with special hours for Memorial Day Weekend.