Coming Soon to a Resort Near You 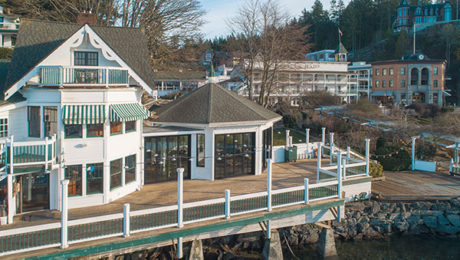 This is the third in a three part series mentioned on Wednesday about things happening around here. Today we hear Roche Harbor Resort General Manager Brent Snow’s report on some things happening at the north end of the island:

Restaurant Remodeling
Both restaurants in the main building have gone through extensive remodeling. Downstairs at the Madrona Grill the interior has been completely redone including the gazebo area and it is much nicer for diners. In case you missed, it they had a grand re-opening in January so go check it out one of these days.

Upstairs at McMillin’s Restaurant, what started as a sprinkler upgrade in the kitchen of the 100+ year old building, eventually got as far as tearing everything out down to the foundation and completely rebuilding the kitchen. McMillin’s is scheduled to re-open on May 20.

Organic Farm
Also, Roche has a new farm. Originally planned at about 100 feet square, this project grew as well and has now become a 1 acre farm. It is being run by Tate Brumsickle and is all organic (all except the “organic certification” part, which requires a huge amount of red tape). Vegetables from the farm including baby beets and baby carrots will be served seasonally in the restaurants, sold at the Roche Harbor Store and maybe in Friday Harbor as well.