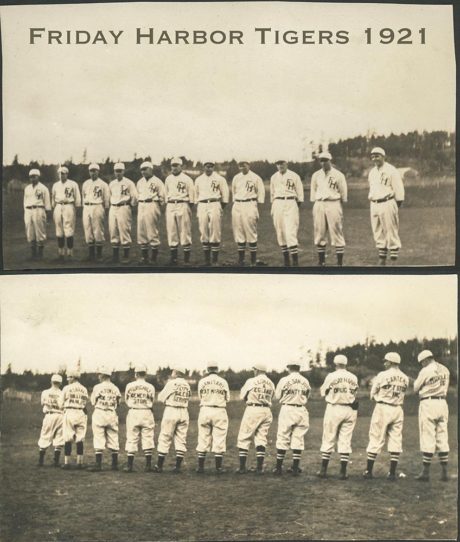 These two striking photographs were shared by the family of one of these Friday Harbor Tigers teammates. At last month’s 3rd Annual Show and Tell evening at the Library, archives researcher Andy Zall presented on the importance of “reading” a photograph, rather than just “looking” at it. With that in mind, we have been “reading” with curiosity. Where did this team play? Who did they play against? Who are all these guys? And can we make out all the business sponsors on the backs of their uniforms?

We know the identity of the man on the far right. It is labeled as John Douglas, Jr., who was the son of Jack Douglas, proprietor of the iconic pioneer establishment known as Saloon Best. The younger Douglas was married to Florence Guard and would turn 32 the summer this photo was taken in what we think was 1921, so we know it was an adult team. San Juan Islander newspaper articles had been reporting on the Friday Harbor team for many years, so we know it was a well-established team. One 1910 article referred to their playing field as “on the King place, fronting on Guard Street.”

The Friday Harbor Tigers played against teams from places such as Lynden, Bellingham, and Fort Worden. In 1912, Friday Harbor had won 15 straight games before losing to Seguin (the old spelling of Sequim – win a trivia contest with that one) by the score of 13 to 3. It was later revealed that the Seguin team manager had hired “ringers” from Seattle and Fort Worden (San Juan Islander, August 2, 1912). We should have won that game!

We may not know the names of 10 of the 11 men in these team photos, but we can document the names of all 11 business sponsors. It reads like a page from a business directory. From left to right: Ross Tulloch Hardware, McCrary? Baker Billiard Parlor, Wm Fowle Ice Cream Parlor, Churchill’s General Store, Ford Sales & Service, Sanitary Meat Market, Leonard & Egland (appears to be misspelled), The San Juan County Bank, Friday Harbor Drug Co, Carter’s Dept Store Inc, and Bell Middleton Co.

Now we have not only research to do on 11 baseball players, but also 11 island businesses from almost 100 years ago, including Friday Harbor Drug which is, of course, quite in the present. Do you recognize anyone from your family in this team photo? We can find some of their names in archived issues of the Journal, but it would be great to know who is standing where in this line of players.