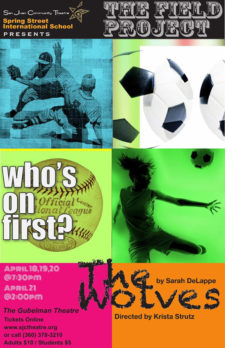 The Field Project consists of a play and a comedy sketch: The Wolves and Who’s on First?

The Wolves, by Sarah Delappe: Left quad. Right quad. Lunge. A girls indoor soccer team warms up. From the safety of their suburban stretch circle, the team navigates big questions and wages tiny battles with all the vim and vigor of a pack of adolescent warriors. A portrait of life, liberty, and the pursuit of happiness for nine American girls who just want to score some goals.

Who’s on First? is a comedy routine made famous by Abbott and Costello. The premise of the sketch is that Abbott is identifying the players on a baseball team for Costello, but their names and nicknames can be interpreted as non-responsive answers to Costello’s questions. For example, the first baseman is named “Who”; thus, the utterance “Who’s on first” is ambiguous between the question (“Which person is the first baseman?”) and the answer (“The name of the first baseman is ‘Who’ “).