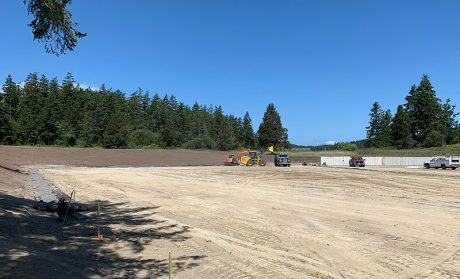 Work to complete one more athletic field – this one for baseball — got under way on June 10 at the John O. Linde Community Park by Mike Carlson Construction.

The San Juan Island Community Foundation is overseeing the work through an oversight committee , Island Rec director Maddie Ovenell said. Island Rec operates and maintains the park through an arrangement with the school district which owns the land.

The cost of the work has been covered by an anonymous gift to the Community Foundation, according to Carrie Unpingco, the Foundation’s executive director.

“Mike Carlson and his crew are doing such a fantastic job and are not wasting a minute,” Unpingco said.

The 30-acre park has been developed in stages, as financing has become available. The other fields already completed are for softball, soccer, and one football/multi-purpose field.

Over the years an anonymous donor has given the money for development and construction at the park through the Community Foundation. Operation and maintenance are covered by an Island Rec levy approved by the voters every six years.

In addition to the athletic fields, there is a children’s playground and an 8-foot-wide paved perimeter trail.

Island Rec will take over the operations and maintenance of the facility once construction is completed, Ovenell said.

The park was dedicated in 2017 and named for long-time resident John O. Linde who was an ardent fan of youth sports, as well as an attorney and District Court Judge and later Superior Court judge. He was a key player in the early development of the park. Linde died while swimming in Hawaii in 2009.